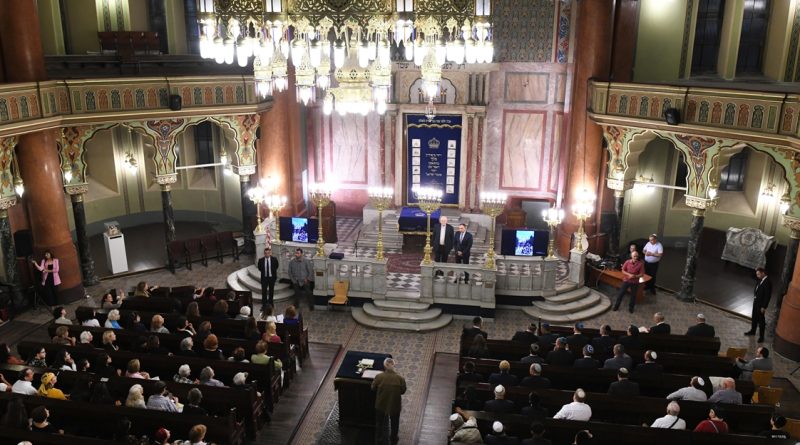 Sofia Central Synagogue was the scene of celebrations on the evening of September 14 as the landmark building in Bulgaria’s capital city marked its 110th anniversary.

“For more than 110 years, this building has been our home – a place where we converse, build relationships, teach lessons and promote values, a place where successes and adversities are shared with loved ones,” Sofia Cohen, president of the Central Israelite Religious Council of Bulgaria, told the event.

Associate Professor Alexander Oscar, president of the Organization of the Jews in Bulgaria “Shalom”, noted that the following day, the Ronald S Lauder School, the first Jewish school founded in Bulgaria in many decades, would be officially opened.

Dr Oscar quoted Elie Wiesel’s reply to the question about the best way to fix the world. “The answer is education – and memory,” Wiesel had said, and Dr Oscar said that while the Synagogue represented memory, the new school represented the future.

World Jewish Congress president Ronald S Lauder, who came to Sofia for the Synagogue celebration and the opening of the school, spoke movingly of the efforts he had made for the restoration of the Synagogue after the end of the Cold War.

As head of the Jewish Heritage Programme of the World Monuments Fund, he had kept a fragment of plaster from the Sofia Central Synagogue on his desk as a daily reminder of the profound meaning of the task of restoration.

At the ceremony, Shalom conferred on Lauder a special award in appreciation for his great contribution to the Sofia synagogue and the Bulgarian Jewish community.

Sofia mayor Yordanka Fandukova told the celebration: “Let us always remember that history will judge us by deeds, not intentions”.

Fandukova said that the Synagogue was among the houses of worship that constituted the “quadrangle of tolerance” in Sofia.

“In recent years, with great care and hard work, the Jewish community in Sofia, assisted by the Sofia municipality and the Ministry of Culture, as well as by partner organisations, together we have been able to gradually restore the building, to provide good conditions for spiritual life in it,” she said.

Yoram Elron, ambassador of the State of Israel, said: “It is encouraging how the numbers of tourists from the State of Israel are increasing by the year. Naturally, for those who come to the city of Sofia, this Synagogue is a must-see. Some of them are a new generation of descendants of Bulgarian Jews, but whether or not, every one holds in their heart affection for Bulgaria, and most of all, gratitude for the courage Bulgarians showed in the rescue of the Bulgarian Jews.”

The ties today between Israel and Bulgaria are manifold, and contemporary – not only historical, he said.

“And on both sides, there is determination to see them build and grow. They stand on foundations as sturdy as those of this Synagogue. They may soar as its magnificent dome does,” Elron said.

Major contributors to those ties are the Organization of the Jews in Bulgaria “Shalom” and the Central Israelite Religious Council of Bulgaria, he said.

“From my predecessors, I know that their reputation goes before them, and I am delighted to say that from the interactions I already have had with Shalom, we already have established a positive and warm relationship, certain to yield great results in the future.

“I have come to you as an envoy. Standing in this great Synagogue, I understand how you feel it to be a home, and I am honoured to join you in your home,” Elron said.