Bulgaria has joined the majority of European Union countries in recognising Juan Guaidó as interim President of Venezuela.

In a statement, Bulgaria’s Ministry of Foreign Affairs said that it was convinced that the Venezuelan people should be given the right to determine their own future based on the principles of the democratic and the rule of law.

According to official data, about four million people already had left Venezuela, the ministry said, noting that inflation was about to reach 1.7 million per cent. There was no food, medicines, drinking water – the country faces a huge humanitarian crisis.

The Foreign Ministry said that on January 26 2019, the EU, including Bulgaria, called for the urgent holding of free, transparent and fair presidential elections in Venezuela.

EU member states had indicated that if no new elections are announced, they would take action within the next few days, including on the issue of recognition of the country’s leadership in accordance with Article 233 of the Venezuelan constitution.

In a resolution adopted by 439 votes in favor, against 104 against and 88 abstentions, the European Parliament expressed its full support for the National Assembly as the only legitimate democratic body of Venezuela and recognized Juan Guaidó as legitimate interim President in line with the Venezuelan constitution, the Bulgarian Foreign Ministry said.

“Nicolás Maduro, who was elected in a vote voted illegitimate by the EU, the US, Argentina, Brazil, Canada, Colombia and other Latin American countries in 2018, has already announced that he will not comply with the call to organize new and transparent presidential elections,” the ministry said.

“We believe that Juan Guaidó, President of the National Assembly, as interim president of Venezuela, will schedule free, fair and democratic presidential elections in accordance with the constitution.”

The ministry said that it had initiated a conciliation procedure for a draft decision to support the transition to a democratic government in Venezuela based on the rule of law and respect for human rights.

Radev, head of state for the past two years after election on a ticket backed by the opposition and pro-Moscow Bulgarian Socialist Party, said that there is a real risk of escalation and violence in Venezuela, and it was critical to maintain dialogue between the government and the opposition.

According to Radev, the proposal for a common European position would not lead to a solution. 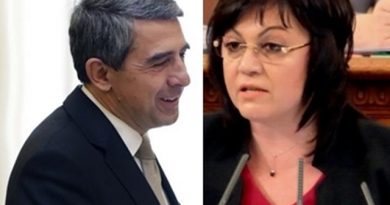