Europe’s economy continued to expand in the first half of 2018, although at a slower-than-expected pace, specifically in advanced Europe, the International Monetary Fund said on November 8, announcing that it was lowering its economic growth forecasts for the region for 2018 and 2019.

Driven by domestic demand, economic activity continued to expand in the first half of 2018, the IMF said in its latest health check of Europe’s economy. But the outlook is less favourable, with several forces likely to hamper economic growth.

Europe has seen strong growth over the past couple of years as many risks did not materialise, the IMF said.

“The region continues to enjoy respectable growth fueled by domestic demand, supported by high employment and wages. Still, the economy expanded at a slower pace than originally predicted.”

The IMF said that the environment in Europe has become less supportive for growth.

Higher oil prices have dampened incomes, the IMF said. Over the past year, energy prices, including that of oil, has climbed. Commodity prices have increased seven per cent since spring 2018, while oil prices climbed to about $80 a barrel in September 2018.

As a result, real disposable incomes fell, on average, by 0.5 percentage points of GDP in most of Europe. Oil producers, Norway and Russia, however, benefited from these developments, the IMF noted.

There had been a long period of manufacturing expansion, the Fund said.

“Europe’s manufacturing sector has enjoyed one of the longest periods of expansion over the last two decades. But against the background of a maturing business cycle, production capacity constraints, and labour shortages are constricting growth, especially in emerging Europe. Capacity utilisation has now climbed to levels last seen before the global financial crisis.”

Compared with the previous forecast by the IMF, growth has been revised downward in about half of the countries in Europe. The downward revisions reflect weaker external demand and higher energy prices. Nevertheless, growth is expected to remain above potential in most countries in the region.

The IMF said that authorities in the region have largely chosen fiscal policies that are further stimulating the economy during the current period of economic expansion above trend. “Consequently, deficits have remained relatively large despite years of strong growth”.

The IMF said that policymakers should “seize the opportunity offered by continued growth and low unemployment to advance growth-friendly policies to reduce high levels of public debt and rebuild resources for future rainy days.

“It is time for vulnerable countries to reduce their deficits and lower their debt. All countries need to redouble their structural reform efforts to boost growth and jobs,” the IMF said. 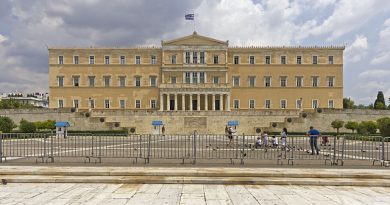