Protests are to be held in Sofia and five other Bulgarian cities on October 22 demanding the resignation of Valeri Simeonov as Deputy Prime Minister over his comments about protesting mother of children with disabilities.

Simeonov, a co-leader of government minority partner the United Patriots, caused controversy when he described the protesters as “shrill women with supposedly ill children” and accused them of using their children for speculation.

In Sofia, the protest, organised by the “The System is Killing Us” group, is to be held outside the Cabinet building at 12.30pm.

Not that stated intentions on Facebook turn into reality – they usually do not – but by the late afternoon of October 21, a total of 5400 people had marked themselves as “going” and 23 000 as “interested”.

Should that become reality, it would be among the largest protests since the third Boiko Borissov government took office in May 2017.

A protest is also planned to be held outside the Bulgarian embassy in London on October 23 at 7pm.

The organisers of the protest in Sofia said that the protests would continue until Simeonov quits office. They called on participants to wear warm clothes and bring food.

On October 20, in an open letter to Prime Minister Borissov and to Simeonov, the National Children’s Network called for Simeonov’s immediate resignation.

The network, which involves close to 150 organisations, said that Simeonov’s “scandalous statement” was not only extremely inappropriate in a situation where for months, a solution had been sought for the children and parents “with the most difficult life in our country” but also was unacceptable coming from someone in public office meant to serve the public.

The network said that it was suspending its engagement with the government while Simeonov remained in office.

An online petitition had been launched demanding the resignation of Simeonov, citing his “ugly speech”. By the late afternoon of October 21, it had close to 4900 signatures.

On October 19, Simeonov responded to the controversy as “another political campaign” against him. He said that his comments (which were made to a television channel he owns, Skat, closely aligned to his nationalist National Front for the Salvation of Bulgaria, NFSB, party) had been “taken out of context”.

He reiterated his view that the children with disabilities were being used for political speculation, even after the government had approved amendment legislation and “met all the demands of the mothers”.

“I know that the truth hurts, but I do not renounce my words,” Simeonov said.

The following day, October 20, Simeonov’s party released a statement saying that it strongly condemned the manipulation of his words “and the use of children with disabilities for political purposes, namely the destabilization of the government”.

The NFSB said that the fake media campaign, the taking of words out of context and the shameless approach of the opposition by the Bulgarian Socialist Party, is a disgrace to the political life in Bulgaria.

The party said that Simeonov had not called into question the health status of the undoubtedly ill children, but by using the word “supposedly” he was expressing resentment of the “unacceptable aspirations of some mothers and leaders of opposition parties to use the misfortune of these children for commercial and political purposes”. 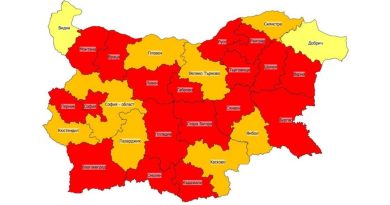 Covid-19: Close to two-thirds of districts in Bulgaria are ‘red zones’