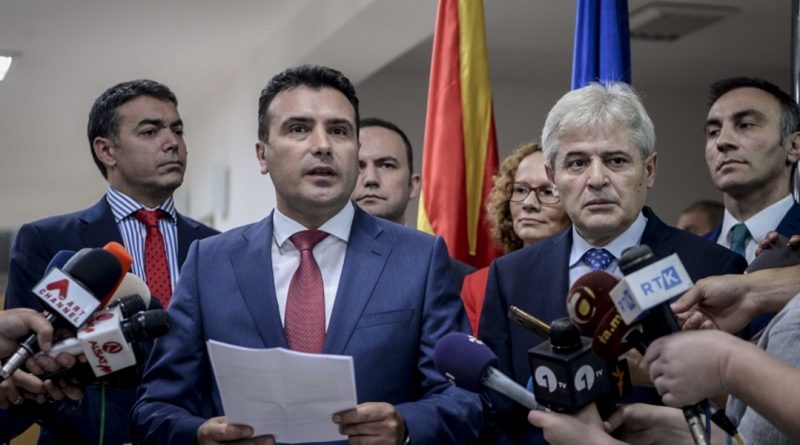 In Skopje, Prime Minister Zoran Zaev has confirmed that “Republic of Ilinden Macedonia” is the option proposed to resolve the decades-long dispute with Greece over the use of the name “Macedonia”.

Zaev was speaking after meeting President Gjorge Ivanov and leaders of political parties to brief them about the proposal, which he discussed with his Greek counterpart Alexis Tsipras in Sofia on May 17, the Independent Balkan News Agency (IBNA) reports.

Tsipras and Zaev held talks on the Macedonia name dispute while both were in the Bulgarian capital city for the EU – Western Balkans Sofia Summit, part of the programme of the Bulgarian Presidency of the Council of the EU in the first half of 2018.

“The Republic of Ilinden Macedonia is a name that strengthens the foundation of our Republic, while Ilinden means the historical continuity of our aspirations, our statehood and our pride. Ilinden is our glorious past, Ilinden is our bright future,” Zaev said.

“By this possible solution we preserve our dignity, we confirm and strengthen our Macedonian identity,” he said.

Saying that he was addressing himself to citizens of Greece, Zaev said: “Once again I confirm, both myself and my people, that we have no territorial pretensions and we confirm the inviolability of the borders and the respect for the heritage of the Greek people and Greece. Macedonia is ready to confirm this in all necessary ways.”

Zaev said that the proposed name would mean historic continuity of the state and a bright future, that the country would in June get an invitation to join Nato while “doors would be opened in the EU”.

The government in Skopje is hoping that at the European Council meeting in late June 2018, the former Yugoslav republic will be given a start date for EU accession negotiations.

Ivanov responded with reservation to the proposed name, while Hristijan Mickoski, leader of the centre-right opposition VMRO-DPMNE, rejected it. He dismissed the process as having been developed in secret, IBNA reported.

Greek daily Kathimerini said that Greek party leaders had rejected Zaev’s proposal for the name, while opposition also was expected from ruling Syriza.