There are persistent concerns about grave damage to media pluralism in Bulgaria caused by factors including corporate and political pressure, growing and non-transparent concentration of ownership and distribution as well as how the government shares out support for the media.

This is according to the US State Department annual report on human rights practices, released on April 20 2018.

Bulgarian law provides for freedom of expression, including for the press, and the government generally respected these rights, the report said.

“Concerns persisted, however, that corporate and political pressure combined with the growing and nontransparent concentration of media ownership and distribution networks, as well as government regulation of resources and support for the media, gravely damaged media pluralism.”

The report noted that the International Research and Exchanges Board’s (IREX) 2017 Media Sustainability Index identified the growth of political pressure and the use of media by oligarchs to “exert influence, ruin the reputations of political and business opponents, and manipulate public opinion” as major threats to the public’s trust in the media.

The law provides for one to four years’ imprisonment for incitement to “hate speech.”

A 2016 survey by the NGO Open Society Institute found “a disturbing trend of increasing public instances and acceptance of hate speech.”

NGOs noted that the presence of nationalist parties in the government “empowered” their supporters to resort to hate speech as a norm, rather than an exception. Paid “trolls” populated forums and social media of all media outlets, targeting political opponents with racist and xenophobic comments.

As of October, Bulgarian prosecutors had opened 14 hate crime investigations and had pursued four indictments against 12 people; the courts issued four convictions, including two prison sentences.

The report said that, according to the Reporters without Borders’ 2017 World Press Freedom Index, the press environment was “dominated by corruption and collusion between media, politicians, and oligarchs.”

That report noted that there was lack of transparency in the government’s allocation of funding to certain media outlets, which had the effect of bribing editors to be lenient in their political reporting or refrain from covering problematic cases.

“Despite a 2016 European Court of Human Rights ruling that publishers are responsible for the content of their forums, few online media outlets imposed stricter policies on posts.”

Domestic and international organizations criticized both print and electronic media for lack of ownership and financial transparency, editorial bias, and susceptibility to economic and political influence.

On March 21, the publishers of Pras Pres, a satirical periodical criticizing the government, filed a complaint with the Commission for Protection of Competition claiming that the National Distribution company had abused its dominant position in the press distribution market and stopped the first Pras Pres edition from sale in its outlets, the US State Department report said.

This edition had been distributed in 10 000 copies on March 1. In June the commission decided that National Distribution had not violated competition regulations, citing the company’s explanation that it runs between 5000 and 10 000 outlets and it was possible some of them did not get any Pras Prescopies.

On October 6, National Assembly member Anton Todorov told Nova Television morning talk show host Viktor Nikolaev that he “would have fired him” for a question referring to Todorov’s past strong criticism of the party he represented in the National Assembly.

Nikolaev’s next guest, Deputy Prime Minister Valeri Simeonov, accused the journalist of “shaking the government,” and when Nikolaev responded that “the government is shaking itself,” Simeonov suggested that Nikolaev could easily lose his job.

In response, the Association of European Journalists Bulgaria called for boycotting politicians who threaten journalists. Both politicians subsequently asserted that their words had been taken out of context and misinterpreted as threats.

On October 9, Todorov tendered his resignation from the National Assembly, citing his desire to save the reputation of his party, while Simeonov called for an apology from the four electronic media outlets that he believed misinterpreted him and threatened to sue them.

In December the prosecution service indicted Martin Dushev and Veselin K. for the January 2016 assault on Pomorie journalist Stoyan Tonchev, who suffered numerous fractures and was temporarily in a coma. According to Tonchev, the attack was prompted by his criticism and investigation exposing corrupt deals by the local government.

“Journalists continued to report self-censorship, editorial prohibitions on covering specific persons and topics, and the imposition of political points of view by corporate leaders,” the State Department report said.

In March, businessman and publisher Sasho Donchev stated at a business forum that he had been invited to a private meeting with the Prosecutor-General (Sotir Tsatsarov) “to tell me that he finds my behaviour increasingly unacceptable and insufferable.”

Donchev alleged that the Prosecutor-General accused him of support for a specific political party, pressured him over articles in his newspaper, threatened his business, and warned him that his communications were being monitored.

Journalists’ reporting on corruption or mismanagement prompted many defamation cases brought by politicians, government officials, and other persons in public positions.

“According to the Association of European Journalists, journalists generally lost such cases because they could rarely produce hard evidence in court,” the US State Department report said. 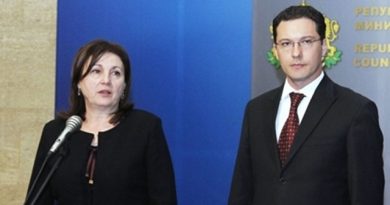