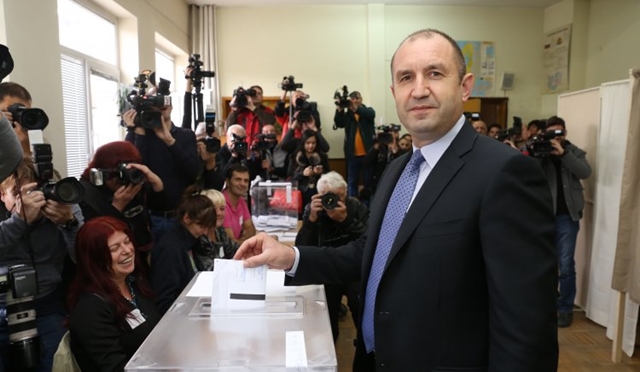 As Bulgarians head for a second-round vote in presidential elections on November 13, the bigger issue is whether the country also is headed for early parliamentary elections.

Roumen Radev, backed by the opposition Bulgarian Socialist Party, came out top in the first-round vote on November 6, ahead of the candidate nominated by Prime Minister Boiko Borissov’s centre-right GERB party, Tsetska Tsacheva.

Radev, formerly the general commanding Bulgaria’s Air Force, scored a victory of just a few points over Radev, going by the exit polls of all opinion survey agencies made public in the first few hours after polls closed.

This triggered the question whether Borissov, as in various phrasings he has said he would do, would resign and open the way for early parliamentary elections.

As midnight approached on November 6, Borissov had made no public appearances. The general line from his party was that more concrete results would be awaited before any statements were made.

Some of his Cabinet ministers from the GERB component of Borissov’s coalition Cabinet spoke. Deputy Prime Minister Tomislav Donchev, while insisting that the election was not over, and Tsacheva could not be said to have lost, pending the second round, appeared to hint that Borissov might be expected to follow through on his promise.

Regional Development Minister Liliyana Pavlova, however, said soon after the exit polls came out that she saw no reason to resign, and that she was optimistic that fuller results would see the gap between Radev and Tsacheva narrow.

Finance Minister Vladislav Goranov said that he did not feel as if he was a minister resigning, also insisting that “we do not have final results to comment on, to talk about resigning”.

Notably, Goranov said that Donchev was in favour of resigning. According to Goranov, Donchev had said this during a conversation at which GERB campaign chief and deputy leader Tsvetan Tsvetanov was not present.

Later on, Donchev said that the question of the resignation of the Prime Minister was Borissov’s decision, “but as far as I know him, he would keep his word”.

Partners in Borissov’s coalition government were faced with questions on the issue at their election night news conferences and when door-stepped by journalists, and for that matter, whether they would be issuing second-round endorsements of the GERB candidate.

Krassimir Karakachanov, presidential candidate of the ultra-nationalist United Patriots ticket, would go no further than saying that his electorate would be looking at the runoff candidates’ positions on issues they felt strongly about, such as opposition to illegal migration, and the legislation of a much-increased minimum pension.

Otherwise, as to whether Borissov should or would resign, Karakachanov said that he could not speak for Borissov.

The United Patriots’ news conference was dominated rather by the leaders of the participating parties enthusing about how they would carry on, after the presidential elections, working together in the National Assembly. This is of some significance, considering that the Patriotic Front and Volen Siderov’s Ataka have for some years been sworn foes.

The centre-right Reformist Bloc coalition, the other minority partner in Borissov’s government, was characteristically divided.

On the issue of a second-round endorsement, senior Reformist Bloc figures who are part of the majority of the coalition that supports the Borissov government, generally declared for Tsacheva.

Their presidential candidate, Traicho Traikov, posted on Facebook a denial of a statement by Reformist Bloc colleague and Economy Minister that Traikov had endorsed Tsacheva for the second round.

The opposition party within the bloc, Radan Kanev’s Democrats for a Strong Bulgaria, blamed Borissov for triggering a political crisis.

Health Minister Petar Moskov, who remained in the Cabinet even when the DSB of which he was a member withdrew its support for Borissov’s government, said that he did not think that the government should step down. Doing so would mean an end to the change that it had begun, Moskov said.

The resignation or remaining in power of Borissov’s government is, of course, not up to the Bulgarian Socialist Party either, which did not stop reporters repeatedly asking questions about the issue at the Radev-BSP news conference. BSP leader Kornelia Ninova repeated that the question of Borissov’s resignation should be directed to him, and her party was focused solely, she said, on the November 13 second round.