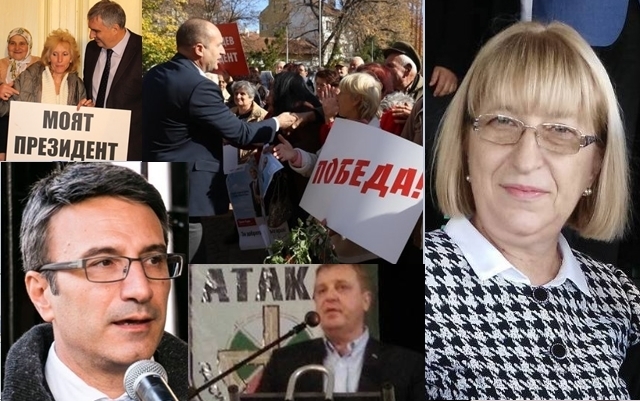 November 2 left Bulgaria’s 21 presidential candidates with just three days, counting Wednesday itself, to persuade the electorate to support them in Sunday’s vote.

By the late afternoon on Wednesday, no new polls by Bulgaria’s more reliable opinion survey agencies had emerged, but expectations remained that the November 6 election would prove to be only the first round in a two-round contest, with a second vote on November 13.

The other major expectation remained that the second round would be a face-off between Tsetska Tsacheva, the candidate of Prime Minister Boiko Borissov’s centre-right GERB party, and Roumen Radev, nominally the candidate of an initiative committee but in reality that of the opposition Bulgarian Socialist Party.

On the campaign trail, Tsacheva chose to mention the name of Plamen Oresharski, not because she seemed politically threatened by the man who in 2013 and 2014 sat in the prime minister’s chair, but as a symbol of political crisis.

“At the end of the presidential campaign, we need to give a clear account of in what Bulgaria we want to live. We cannot allow Bulgaria to fall into political crisis of the kind it had in 2013-2014, but should continue the stability and development of the country,” Tsacheva said.

The results of the “Oresharski experiment” would weigh for a long time, she said, citing suspended EU funds, the “shutdown” of local government because central government was not functioning, while the second Borissov government had to pay more than three billion leva because of the bankruptcy of Corporate Commercial Bank and more than a billion leva in connection with the Belene nuclear power project, which Tsacheva described as economically unjustified.

In the view of Tsacheva, “even opponents of GERB” acknowledged that the party did lot for Bulgarian citizens, including reconstructed schools, building of sports halls, free-of-charge exterior insulation and facelifts of apartment blocks and improvements to infrastructure.

Tsacheva said that what she called the achievements of GERB and Borissov’s government had been possible thanks to European funds, and said that there was no alternative to the European development of Bulgaria.

“To continue this development, to continue to be a factor of stability in the Balkans and in Europe, Admiral Plamen Manushev (Tsacheva’s vice-presidential running mate) and I need your trust,” she said, calling for support on November 6.

BSP candidate Radev, who made stops in the region of Pleven – Tsacheva’s home town – told supporters: “It’s time for decisive change. This starts from the people and their vote.We are at a crossroads and we have to choose whether we will continue on the path of national destruction or will proceed on the way of dignity”.

“Only together and united we will be able to bring dignity to Bulgaria,” said Radev, underlining that his main goal was that the institutions that determine the future of Bulgarians should work together, communicate and seek shared solutions to the problems facing the country.

Responding to criticism from other candidates that he had no experience in politics, Radev – a former Air Force commander – said that his experience was in “dedication to Bulgaria”.

In a moment in which Radev appeared to be channelling Trump attacking Clinton (“she’s got lots of experience but it’s bad experience, folks”), Radev said: “As they have so much experience, why has the state crashed and led us to this situation?”

(A question: Will this become the standard rebuttal to every blonde politician who has a record in public office? Will it become a chant during panto season at the seaside? “She’s behind you, but she has bad experience!” Finally, why am I even asking?)

On to Krassimir Karakachanov, the candidate of the nationalist joint ticket of the National Movement for the Salvation of Bulgaria, Ataka and VMRO, billed in this election as the United Patriots.

In a lengthy interview with daily 24 Chassa, Karakachanov, asked if the President could effectively influence government policy, said that were he elected, he would gather a “team of leading specialists in different areas” to develop positions on pressing issues. They would act as a “shadow cabinet,” said Karakachanov.

Asked in turn what would happen if the actual government ignored them, in a question that pointed out that the role of Bulgaria’s President is largely ceremonial, Karakachanov said that it was not true that the President has no leverage.

Karakachanov said that the President has power through being able to summon the Consultative Council on National Security (a statutory body bringing together key Cabinet ministers, leaders of all parliamentary groups, and defence, security and intelligence chiefs), and said that this body could be used for “timely and effective” solutions to the migrant influx, “instead of so-called hybrid threats and cybersecurity” – the latter a sideswipe against incumbent President Rossen Plevneliev, who has raised precisely those issues.

Perhaps he might only persuade MPs never to show up at meetings of the National Assembly, lest President Karakachanov be making a nuisance of himself again.

Later in the interview, he took another sideswipe at Plevneliev, accusing him of acting like a hawk in the confrontation between Russia and the US. The President, Karakachanov said, should strive towards a policy that prevents military conflicts.

When it was put to him that Bulgaria is a member of Nato and the EU, Karakachanov responded: “We are not obliged to repeat like parrots the demands of the US and EU”.

Ivailo Kalfin, the presidential candidate of socialist breakaway party ABC, said that the President should be close to the people and hear their voice (one supposes that may be an interpretation different to that of Karakachanov, who apparently wants the nation to hear his).

Kalfin said that he wanted a presidential institution “much more active and closer to people’s problems”. His campaign, he said, had “different ideas” such as once a month the head of state working in some of the regions of the country.

“We also have proposals to ensure that the ideas of people are much more audible to the presidential administration,” said Kalfin, adding that one was an initiative entitled “What I would do if I was President”. (May I give my idea now? I’d get closer, a lot closer, to the seaside regions during summer. What is the President’s office’s budget for suntan and beach cocktails, anyway?)

The Reformist Bloc’s Traicho Traikov said that he strongly disagreed that Bulgaria should take the blame for the deterioration of relations with Russia or with anyone else. Such behaviour before a foreign great power was “humiliating for Bulgarians,” Traikov said in a television debate.

This appeared to be a reference to Borissov’s recent attempt at a reset of relations with Russia, about which he has spoken publicly, including that he has ordered his foreign minister to pursue such a policy. Sofia’s relations with Moscow have several complexities, including over Nato-related defence and security issues, and with Putin’s regime having blamed Bulgaria for the shutdown of the South Stream project.

Traikov said that Bulgaria needs a foreign policy with honour and dignity and this applies to relations both with Russia and Turkey.

“In any case, good neighbourly relations does not mean returning Erdogan opponents by the sackful,” Traikov said, referring to cases in which Bulgaria has handed to Turkey alleged Gülenists, in circumstances that remain disputed, were allegedly unlawful and that have caused considerable domestic political controversy.

This opened the way for him to attack Tsacheva and Radev, Tsacheva for saying in an October 20 live television debate – when asked about the forcible return of the Gülenists to Turkey – that “human rights were not so important” while Radev had made a comment about how “if a large aggressor country liked the territory of one of its neighbours, it could take it”.

For Traikov, the priority in Bulgaria’s foreign policy should be the development of relations with the countries of the Balkans. “This is the environment that shapes our long-term security. Including the total failure of our policy on relations with Macedonia,” he said.

Bulgaria’s caretaker Health Minister: Vaccinated may be exempted from masks in the workplace