An earthquake in the Black Sea on October 15 reported to measure 5.2 on the Richter scale was felt in Bulgaria’s coastal cities of Varna and Bourgas.

The earthquake, epicentred at a point 195km north-east of Istanbul and about 600km north-east of Bulgaria’s capital Sofia, was at a depth of 10km, and took place at 11.18am Eastern European Time, according to the European Mediterranean Seismological Centre. 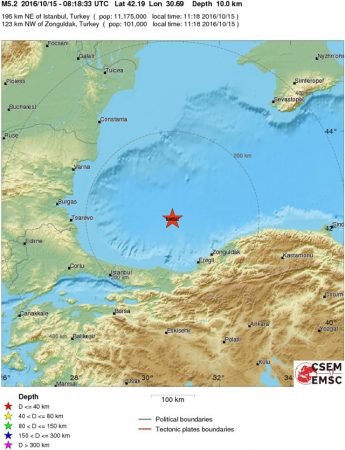 Local media said that the quake was felt in the upper floors of residential buildings in Varna and Bourgas.

Public broadcaster Bulgarian National Television reported the Bulgarian Academy of Science as saying that the earthquake measured 4.8 on the Richter Scale.

The US Geological Survey reported the earthquake, 120km north-north-west of Eregli in Turkey, as having measured 5.3 on the Richter scale. The USGS described the depth as 4.7km.