Watchers see Turkey’s failed coup and the subsequent purge carried out by Turkish President Recep Tayyip Erdogan as part of a battle among Islamists whose ultimate vision is to allow for a greater role of religion in public life. To others, that vision runs counter to the secular society established in the 1920s by Mustafa Kemal Ataturk, the founder of the modern Turkish republic.

When thousands of opposition members and ruling party supporters filled Istanbul’s Taksim Square Sunday to condemn the failed coup attempt against Erdogan, they illustrated the kind of people power that stopped the coup from succeeding.

The display of unity was a rare sight in a deeply polarized nation that has a long history of coups. The mood was largely jovial; opponents and supporters of Erdogan celebrated the one area where they agree: a coup would bring more instability and problems than it would solve.

But along with display of unity was deep apprehension, especially as Turkey embarks on a period under a state of emergency.

“We are worried of course about the state of emergency because to a certain extent our freedom will be restricted,” said Sermin Dalgic, an opposition supporter attending the rally. “We want a country where we can freely speak our minds and hold rallies. That’s the kind of country we want to be,” she said.

In the short and long term, that goal appears to be in question.

The rally had the full blessing of the Erdogan government, which used it to further bolster the legitimacy of his rule and, more importantly, its efforts to purge opponents, especially followers of his rival, former imam Fethullah Gulen. Erdogan accuses Gulen’s massive movement of being behind the coup attempt, a charge Gulen – in self-imposed exile in the United States for 17 years – denies.

Reports of torture continued to emerge on Monday; lawyers said some of the arrested soldiers have been subjected to beatings and rape.
Erdogan is purging opponents and emerging more powerful – and freer to push an Islamic agenda. The Turkish leader has declared the country will raise a “religious generation” and is leading a drive to build mosques.

Melda Onur, a former lawmaker with the main opposition, the secularist Republican People’s Party, does not believe it will be so easy for Erdogan, and thinks the same people power that stopped the tanks the night of the coup attempt, will stop Turkey from becoming an Islamist state.

But she is worried. “It is the cleansing of radical Islamic elements, but on the other hand, it is resisting not leaving its place to those who want a secular democratic republic. We do not know if it is a real cleansing, purging, or something done just to keep the position,” she said.

Onur, like others, says secularism is too deeply entrenched in Turkey, and believes the country’s position between the Muslim world in the East and Europe in the West is a guarantee that Turks will never accept an Islamist state.

“They see the situation of the countries that are not secular in this region. This country has never envied Iraq, Syria or Iran because they know what it is. But on the other hand, they have never envied European liberalism either,” Onur said.

On that point, some Islamists agree.

Looking out her office window at the Bosphorus bridge, Hilal Kaplan, a well known writer and Erdogan supporter, reflects on how she braved bullets when she joined hundreds of others on the bridge who stood in front of the putschist tanks on the night of the coup attempt.

“All the people in Turkey know that coups are bad for us, so if we didn’t do something about it, we knew that something worse, something very catastrophic would happen in Turkey,” Kaplan said.

Like many in Turkey, she sees the purges as necessary. Unlike many others, she does not see an advance toward a more Islamist society as a threat.
As a devout woman who wears a headscarf, she feels freer today than just a few years ago when laws in place since Ataturk’s time forbade women in headscarves from some jobs and public office.

“I think women being in the work force, all kinds of women being in the parliament and other places, creates a huge solidarity among women and gaining women’s rights, and this can only strengthen secularism. I don’t think it’s the other way around,” she said.

Kaplan shudders at any comparison between Erdogan’s vision for Turkey and that of countries like Iran or Saudi Arabia.

“In Saudi Arabia and Iran you can see different styles, but they also lack the European qualities that Turkey has. Iran is a very oppressive regime, and as a head scarfed women, I am disgusted by their laws that they force women to wear head scarfs,” Kaplan said.

Kaplan, like Onur, is optimistic that Turkey’s history and geographic placement will provide at least some guarantee of their freedoms. 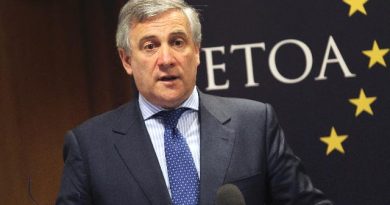 Romania’s Basescu calls for internal debate on union with Moldova

Greece says it will not negotiate with bailout creditors