Turkey’s President Recep Tayyip Erdogan on Wednesday declared a three-month state of emergency in the wake of last week’s thwarted coup in his country.

Erdogan said the emergency was needed to hunt down all of those thought to be responsible for the coup attempt.

Speaking after a meeting with his cabinet ministers, the Turkish leader said the state of emergency was not meant to curb basic freedoms, but instead to counter threats to Turkish democracy.

“As commander in chief, I will also attend to it so that all the viruses within the armed forces will be cleansed,” he said.

State media said authorities were acting to close down 626 private schools and other educational establishments, the latest step of a crackdown after the botched coup. The schools are linked to exiled cleric Fethullah Gulen, who set up a network of schools across Turkey to promote his teachings.

In addition, Turkey banned academics from leaving the country and urged those traveling abroad to return home.

Turkish media reported that the Education Ministry fired 15,200 teachers across the country, while the Interior Ministry dismissed nearly 9,000 workers. Another 1,500 in the Finance Ministry were fired, as were hundreds more in the Religious Affairs Directorate, the Family and Social Policy Ministry, and the prime minister’s office. The country’s higher education board demanded the resignations of 1,577 university deans.

The firings came in addition to the detentions of about 9,000 people Ankara suspects of involvement in the attempted overthrow of Erdogan’s government.

U.S. President Barack Obama has offered to aid in the investigation of last week’s attempted coup.

The White House said Obama and Erdogan spoke by telephone Tuesday. Obama made clear that the United States would “provide appropriate assistance” to the investigation.

The two men also discussed Turkey’s request that Gulen be extradited from the U.S. to face charges that he was linked to the coup attempt. A White House spokesman did not give details about the U.S. position on Gulen’s possible extradition, except to say the decision would be made according to a long-standing treaty between Ankara and Washington.

In his phone call with Erdogan, Obama strongly condemned the coup attempt and urged that investigations and prosecutions related to the uprising be conducted in ways that reinforce public confidence in democratic institutions and the rule of law, according to the White House.

In another telephone call Tuesday , U.S. Secretary of Defense Ash Carter spoke with Turkish Minister of Defense Fikri Işik. The Turkish official assured Carter that Turkey remained a determined and committed partner and ally in the fight against terrorism.

Işik had planned to attend a ministerial meeting that Carter hosted Wednesday in Washington on countering Islamic State, but bowed out to stay in Turkey.

Turkey has sent files to the U.S. on Gulen, who has lived in the United States since 1999. In Washington, the State Department confirmed that Washington did receive some “materials” from Ankara, but that it was working with the Justice Department to determine “whether they constitute a formal extradition request.”

Gulen lives in Pennsylvania on the grounds of the Golden Generation Worship & Retreat Center, an Islamic facility founded by Turkish-Americans. His philosophy mixes a mystical form of Islam with staunch advocacy of democracy, education, science and interfaith dialogue. His movement operates dozens of charter schools in the U.S.

Gulen continues to exert considerable influence in Turkey, with supporters in the media, police and judiciary.

Erdogan and Gulen were once allies, but had a falling out over 2013 corruption investigations in Turkey, which the Turkish leader blamed on Gulen.

The exiled Gulen has also criticized Erdogan’s increasingly authoritarian rule, while the Turkish leader has carried out a broad campaign against Gulen’s movement. 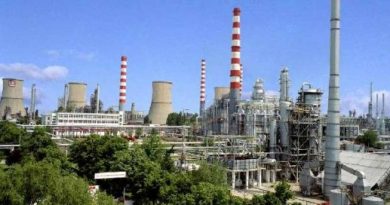 NATO commander ‘concerned’ by flow of weapons into eastern Ukraine