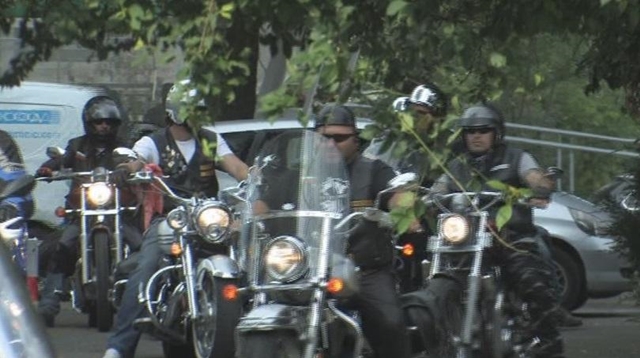 There were arrests in Bulgaria’s Black Sea city of Bourgas on June 30 after clashes between supporters of the Russian pro-Putin Night Wolves motorcycle group and a group of Ukrainians and Bulgarians protesting against them.

The nationalist pro-Kremlin bikers included Bulgaria in their so-called “Slavic World” excursion in 2016. A 2015 tour by the Night Wolves (Ночные Волки) caused considerable tensions in Central and Eastern Europe countries on their route, and they were banned from Poland – though they defied the ban.

Though there were news reports some days ago that the group intended coming to Bulgaria, causing immediate concern about potential trouble, the country did not appear to have issued a ban on them entering.

When the motorcyclists reached Bourgas, a group of Bulgarians and Ukrainians who had organised themselves on social networks were waiting at the entrance to the city to protest against the presence of the Night Wolves. In the past, statements from figures in the Night Wolves have included repeated praise of Stalin and numerous homophobic statements. The Night Wolves are subject to US sanctions because of their role in pro-Russian aggression in eastern Ukraine.

A report by Bulgarian National Television said that tensions rose and matters came to blows, with a total of 15 people from both camps being taken to a police station for questioning. Some were ordered into 24-hour custody, pending charges against them of hooliganism.

Bulgarian National Radio said that those who attacked the protesters were from the militaristic “Vassil Levski” national union, and said that the Russian bikers were not involved in the conflict.

The Night Wolves’ 2016 tour already has covered more than 6000km and their final destination is the city of Nitra in Slovakia.

The Bulgarian leg of the tour, involving about 30 riders, includes a visit to Shipka, scene of a decisive battle in the Russo-Turkish war that ultimately opened the way to Bulgaria’s emergence from Ottoman rule.