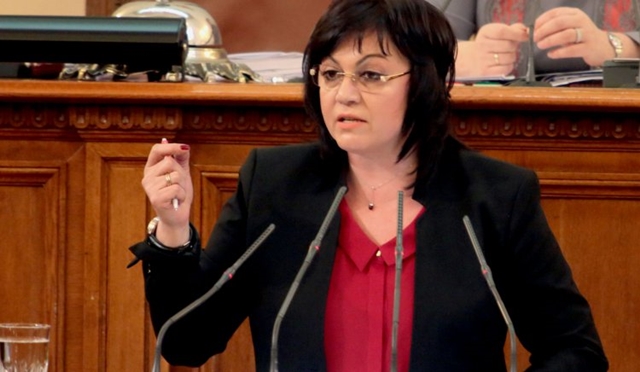 Ninova, a 47-year-old, third-time MP and lawyer, defeated Mikov in a second-round vote to become the BSP’s first woman leader.

Mikov had been BSP leader since July 2014, elected after long-time leader Sergei Stanishev stepped down from the post following the party’s latest electoral defeat. In the July 2014 leadership election, one of the candidates that Mikov defeated was Ninova.

The BSP congress of May 7 and 8 2016 saw drama around the election. Initially, there were 28 candidates for the post of leader. On May 7, five were left after the rest withdrew.

In a late-night vote – held well after the scheduled time, prompting Ninova to criticise Mikov over this and other aspects of the congress that she said showed poor organisation – Mikov emerged with the largest share of votes, 329 to Ninova’s 280.

While this is not the first time that a leadership election in the BSP has gone to a second round, an unprecedented development was that a second round also had to be held for elections to the party’s national council, after a mere two candidates got sufficient votes to qualify at the first round.

The more than 700 delegates to the congress gathered again at the ballot boxes on Sunday, handing victory to Ninova, by 395 votes to Mikov’s 349.

Ninova said afterwards that her main task was to prevent any rift and disappointment, adding a call to those who did not win, to not divide the party.

Among the main challenges that will face Ninova will be Bulgaria’s presidential elections, expected in late October or early November 2016.

Ninova said that she would not be the BSP candidate for president.

She said that change should begin, within the BSP, to renew it, and then a hardline approach to the government and what was happening in Bulgaria. The BSP should be an alternative, and by the end of the year should develop an alternative national plan “to get Bulgaria out of this situation”.

The party that Ninova now has stewardship of, the lineal successor to the Bulgarian Communist Party that held Bulgaria in its thrall for the decades when the country was a submissive loyalist to the Soviet regime, has been largely in decline in the era of Bulgaria’s democratic elections.

But the economic and financial collapse that the BSP led the country into, prompting widespread public protests and a political crisis, saw the party fall, to get only 58 seats in the 1997 elections.

Further decline came in the 2001 elections, when the party formed around Simeon Saxe-Coburg was in the ascendancy, and the BSP got 48 seats.

The elections in 2009 that produced the first government headed by Boiko Borissov, leader of the centre-right GERB party, saw the BSP drop to 40 seats.

The early parliamentary elections of 2013 produced 84 seats for the BSP, and it embarked on an ill-fated coalition government with the MRF, held in place with the votes of Volen Siderov’s far-right pro-Russian party Ataka.

May 2014 brought European Parliament elections in which the BSP was thoroughly thrashed, leading after some time to the resignation of Stanishev, holder of the post since the end of 2001, as party leader.

Mikov, who had been Speaker of the National Assembly at the time of the 2013/14 ruling axis and who was interior minister at the end of the 2005/09 tripartite coalition, took over the party, leading it to defeat in the 2014 early parliamentary elections and again in the autumn 2015 mayoral and municipal elections.

The BSP won 39 seats in the 2014 elections but currently has 38 MPs, having expelled one for disloyalty to the party. This makes it the second-largest party in the National Assembly, but well behind GERB’s 83 MPs.

After Ninova was elected leader on May 8, Mikov said that he was resigning as parliamentary group leader of the BSP.

He would do nothing to obstruct Ninova, Mikov said.

“I know that in life, you cannot only win, you have to learn to lose. The important thing is to do so with dignity, and not to win using dishonourable means,” he said.