Arrivals in Italy and Greece of migrants and refugees via Mediterranean sea routes so far in 2016 exceeded 150 000 by March 10, while there had been 455 deaths, the International Organisation for Migration (IOM) said.

IOM said that, although traffic of migrants and refugees through Italian waters no longer comprises the principal flow – sea traffic to Greece dominates – arrivals in Italy this winter had been much higher than during either of the previous two years.

This was an indication that the Libya-to-Italy route remains a preferred migrant path, IOM said.

Migrant deaths along the so-called Central Mediterranean route total 97 so far in 2016, a steep decline from the 428 recorded a year ago.

More than 350 migrant deaths have been recorded so far in 2016 in the waters between Turkey and Greece.

IOM said that by the end of February 2016, there had been more than 9100 arrivals in Italy, mainly from the countries of Sub-Saharan Africa. Arrivals during these same two months of 2015 were just 7882, while in January-February 2014, even fewer: 5506.

Moreover, Italian authorities report a different mix of migrants. Instead of Syrians and Eritreans, Nigerians are the largest group represented this year along the Central Mediterranean route, more than one in five of all migrants arriving.

“The number of Nigerians transiting Libya is on the rise,” said Othman Belbeisi, IOM Libya chief of mission. His team was to assist in the humanitarian repatriation of 172 stranded Nigerians on March 11, with a charter flight scheduled to leave Tripoli for Lagos.

Flavio Di Giacomo, spokesperspon for the IOM co-ordinating office for the Mediterranean, said: “A total of 406 Nigerian women arrived in Italy in the first two months of the year. According to IOM, about 80 per cent are victims of trafficking”.

During February, Nigerians were arriving at a rate of 27 a day, compared to fewer than 10 daily during the same period in 2015. This winter saw a surge in Gambians (an average of 23 a day), Malians, Guineans (both about 13 a day) and Ivorians (12 a day).

One nationality whose number has declined: Somalis. In February, 444 arrivals from Somalia were recorded by Italian authorities. Last year at this time, the total was 1088.

Arrivals in Greece are continuing at a daily average of 2000, IOM said.

Updated unofficial data of arrivals in Greece by sea since the start of 2015 now stands at more than 985 000. At current levels of arrivals, IOM expects the total number of sea-borne migrants and refugees to Greece in the current emergency to reach the million-person mark by the end of next week.

IOM estimates that 80 460 migrants or refugees have landed on the island of Lesvos, 10 165 have reached the island of Samos, and 30 000 migrants have crossed to Chios; about 8200 reached Leros island.

According to the Greek authorities, 47 per cent of newly arrived migrants are from Syria, 27 per cent from Afghanistan, 17 per cent from Iraq, three per cent each from Iran from Pakistan.

Macedonian president Ivanov: I will not allow constitutional amendments for the name change 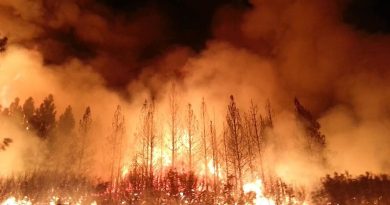