Peter Altmaier and German Foreign Minister Frank-Walter Steinmeier issued veiled warnings on Saturday to eastern members such as Poland, Hungary and the Czech Republic that their aversion to accepting refugees could come at a high cost.

In a majority summit decision in September, EU leaders voted to redistribute 160,000 refugees from Greece and Italy to other EU nations using criteria such as their size of population and economy. The move was approved over the dissent of a number of countries.

European solidarity was “not a one-way street,” said Steinmeier, referring to EU treaty commitments signed by members during accessions to the 28-nation bloc and Brussels’ option to file breach of contract lawsuits at the European Court of Justice.

“If it can’t be done any other way, then things will have to be clarified using judicial means,” he told the German news magazine “Der Spiegel.”

“Europe is a community based on law in which someone’s word once given counts,” Steinmeier said, adding that legal action was “not pleasant but sometimes necessary.”

Hungary’s populist Prime Minister Viktor Orban told the right-wing Czech newspaper “Lidove noviny” on Saturday that it must have been clear to “even to the simplest person that we should not allow such a mass of people to march into our lives without controls.”

To do nothing would exhibit a “suicidal tendency,” he said and went on to defend Hungary’s pursuit before the European court of its own lawsuit against migrant reallocations, similar to a lawsuit filed by Slovakia in early December.

Left-wing parties in Europe were behind the arrivals that surged in August, said Orban whose government in September began fencing off Hungary’s border segments with Serbia and then Croatia to keep out migrants.

“We have the suspicion that in Europe secretly or behind-the-scene [migrant] voters are being imported,” said Orban, telling “Lidove” that most migrants, if given citizenship in Europe, would vote left. 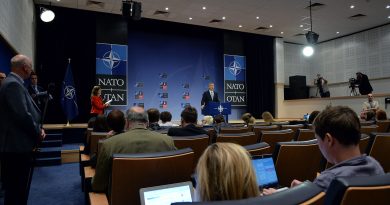