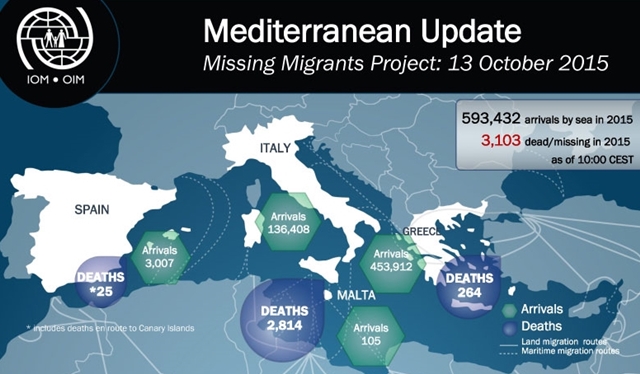 Italy registered the arrival of 132 071 migrants from January to the end of September 2015 – a slight drop from the number recorded during the same period in 2014, when arrivals totalled 138 796. As of October 13, the total is more than 136 408, the International Organization for Migration (IOM) said.

According to IOM estimates, at least 3103 migrants have lost their lives in the Mediterranean since the beginning of 2015, often because of bad weather conditions and the acute disrepair of the overcrowded vessels used by the smugglers.

While most migrants were adult men, there were also significant numbers of women and children, particularly unaccompanied minors (10 043), IOM said.

These nationalities were also among the top 10 this time in 2014, when the most represented group was composed by Syrians, who now reach Europe mainly via Greece.

“One alarming aspect of these figures is the increase of the arrival of Nigerian women – 1008 last year, 4371 in 2015,” said Federico Soda, Director of the IOM Coordination Office for the Mediterranean. “

We know that many of these women are potential victims of trafficking, IOM Italy has established two anti-trafficking teams who provide information and offer protection to these women.”

On October 9, the first relocation operation supported by the European Commission took place in Rome. The first 19 migrants were Eritreans, who arrived a few days earlier in Lampedusa, and were flown to Lulea in Sweden.

“The operation represented an important step toward the establishment of a mechanism that will be able to provide support to Italy and offer a valid alternative to those migrants who see Italy as a country of transit,” Soda said.

According to data provided by Greek authorities and collected by IOM Regional Staff in Greece, more than 450 000 migrants have arrived as of October 13 by sea to Greece.

“While nationalities arriving by sea to Greece are mainly composed by people fleeing war or persecution, in Italy the flows are more mixed, and include people fleeing conflict and oppressive regimes, but also poverty,” Soda said.

“However, given the situation in Libya, we may also consider the economic migrants (mainly from sub-Sahara Africa) passing through Libya as vulnerable, as they are often systematically and cruelly abused by smugglers and traffickers,” he said. 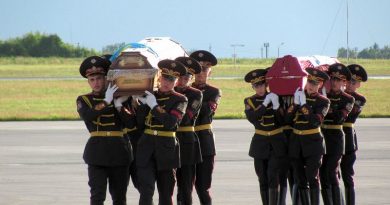