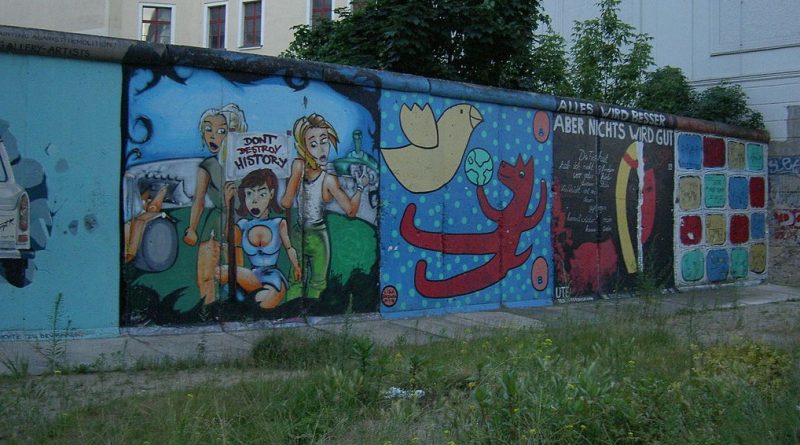 Protesters in Berlin are trying to stop developers from dismantling one of the longest remaining stretches of the Berlin Wall.   But, they face an uphill battle.

The Berlin Wall was once of the starkest reminders of the Cold War.  It was put up by communist East Germany in 1961, to stop its citizens from fleeing to West Berlin.  But today, the wall that once snaked around the whole German capital is almost entirely gone.

Except for at the East Side Gallery.  Today, the one-mile-long stretch of the wall contains murals by artists from around the world.

But on Friday, construction workers began removing a 22-meter chunk of the wall, the first step in a project that aims to build a luxury apartment tower on the site.

And that has caused a stir — 200 people turned out to protest, and three were arrested.

Kani Alvi is an artist whose mural appears on the wall.  He says the wall is too historically significant to tamper with.

“This is the longest remaining stretch of the wall.  If we take it apart, we won’t have proof to show future generations how extensive the wall was, and how it divided the people,” he said. “And this is a message that we must continue teaching.  Without the wall, future generations won’t believe how it really was.”

The mayor of Berlin declined to comment for this story.  But Volker Thoms, a spokesman for the builder, Living Bauhaus, told VOA that his company intends to reconstruct the pieces of the wall elsewhere on its property.  He also noted something that even local papers and some Berliners have pointed out — that this valuable land had been sitting disused for years.

The wall is technically a protected historical site. But last week, the city gave the go ahead to remove part of the wall.  Tourists were surprised at the news, including some students from the New York area.

“We actually just heard of plans today, and I was a little surprised to hear that actually,” said Ali Bergstein.

“I was really shocked, we found out this morning when we were planning to come here, and we think it’s kind of terrible,” Abby Seelig said.  “It’s such a monumental part of history.  And for them to move it, tear it down to build something modern is just horrible.”

I think it’s dreadful, at a place like this, which is so historic [a] place – they’re changing the whole character of the city,” said Philip Winter. “I think they should keep it as a park for the people, not for the few rich people who can afford to be here.

The protesters vow to continue their fight in court to protect a piece of Cold War history.