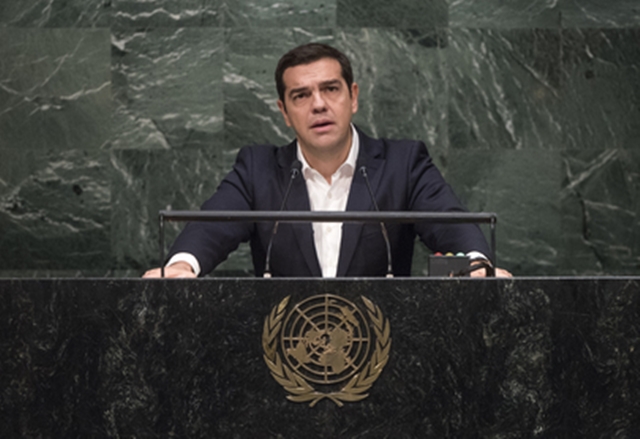 Greek prime minister Alexis Tsipras says that his country is striving to bolster regional security and is supporting all efforts promoting peace and stability, even as it copes with three complex challenges – an economic crisis, unprecedented migration flows, and huge numbers of refugees from outside the region.

Addressing the United Nations General Assembly on October 1, Tsipras described the consequences Greece has faced since the 2008 economic downturn. Because structural weaknesses of its economy and its high debt and budgetary deficits, Greece was hit hard, he said.

Greece lost 25 per cent of its gross domestic product (GDP), the debt to GDP ratio grew to 180 per cent while unemployment reached 27 percent and the migration of graduates to European countries accelerated.

“What we faced was a firm commitment of some to the idea that Greece must exit the euro zone, or that the institutional and structural reforms that we need, have to be combined with austerity measures and welfare and wage cuts,” Tsipras said, as quoted by the UN News Centre.

Greece eventually agreed to a new stabilisation programme that included reforms in public administration, pension and tax system, which stabilised its economy by settling the foundation for a re-profiling of its debt. These measures hampered its society and the economy further.

“We have to realise that we need a global financial and economic system oriented to fostering national growth strategies and our post 2015 development agenda. We have to discuss the issue of debt restructuring in all competent forums – including this one – in connection to developing growth and not austerity – strategies,” Tsipras told the UN.

The second challenge, he said, is the rising number of refugees and migrants on the move in Europe – and entering Greece in large numbers.

“Since the beginning of the year, over 300 000 people – mostly from Syria, Iraq and Afghanistan – have entered the country with the aim of transiting to Western European countries. Greece –like all other European countries – was taken aback by this development. Nevertheless, the people of Greece showed their solidarity by providing food and shelter to the refugees,” Tsipras said.

He said that in co-operation with the European Union (EU) and other international organisations, Greece is trying to manage these flows in an effective and humane way. The country has been improving reception facilities and identification procedures as well as setting up hot spots to facilitate relocation.

“Nevertheless, for some the only way to deal with this challenge is to build walls higher, to repel migrants by force or to ensure that they remain someone else’s responsibility – as far away as possible. We do not believe that the future of Europe, or our world, can be built on ever-higher walls, or children dying at our doorstep. Neither can we forget that many of our ancestors were refugees and migrants. We cannot allow racism and xenophobia to destroy our common principles,” Tsipras said.

He suggested building necessary resettlement mechanism from countries neighbouring Syria, while also supporting them directly in hosting refugees and dismantling trafficking networks. Such a resettlement mechanism, together with the existing relocation mechanism in Europe, will give hope to these people, discouraging them from trusting traffickers.
Further, more assistance must be provided to the European countries facing the refugee crisis ‘in their effort to manage these flows.’

Tsipras said that Greece is also at the centre of a third security crisis that causes this refugee crisis. Greece lies at the heart of a triangle of destabilisation, with Ukraine to the north and the conflicts in Libya and in the Middle East, to the southwest and southeast.

“We do not have the luxury to make foreign policy choices without examining in advance, what their consequences will be,” he said. “Nevertheless, again, we hear some, insisting that we should embark on unilateral initiatives without considering their prospects and consequences. Or leave the conflicts to be settled by themselves without contributing to stabilisation or reconstruction. Yet, these are exactly the mistakes that brought us here in the first place,” Tsipras said.

He said that the Middle East Peace process is of key importance for the region. Tsipras said that a new momentum for a solution must be promoted, with a view to the creation of a state of Palestine on the basis of the pre-1967 borders (with East Jerusalem as its capital) that co-exists peacefully with Israel.

Tsipras extended Greece’s full support to intercommunal talks to resolve the Cyprus issue, reflecting a similar suggestion made by President Nicos Anastasiades of Cyprus at the UN General Assembly earlier in the week.

Tsipras said that Greece has been making steady efforts to improve co-operation with Turkey through a wide range of initiatives, including the promotion of the dialogue on confidence-building measures. 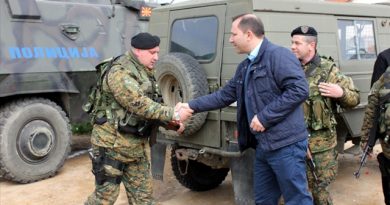