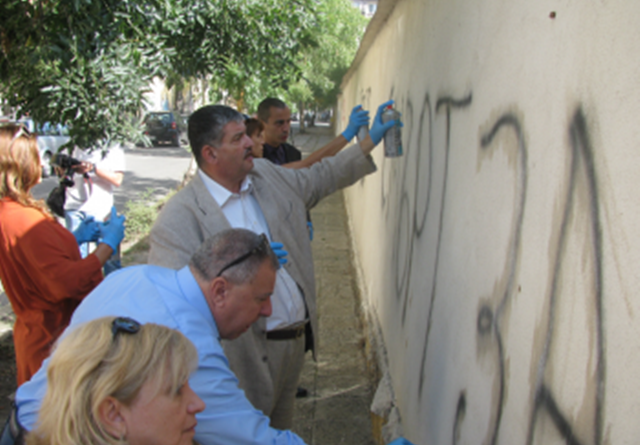 Swastikas and ethnic hate speech graffiti were cleaned off the walls of schools in Bulgaria’s capital city Sofia on September 18 as part of the latest “Let’s Clean Off Hatred” initiative.

Sofia mayor Yordanka Fandukova is the patron of the initiative, and among the organisers are leaders and members of the Bulgarian Organisation of the Jews, Shalom, the Federation of Zionists in Bulgaria and the Etnopalitra organisation.

Young people from various communities and pupils took part in the initiative, being held for the fourth year.

This year organisers anticipate also holding other events, related to the prevention of acts of hatred, xenophobia, racism and anti-Semitism on the internet and in sports.

Shalom organisation president Maxim Benvenisti said that it had been decided to clean the “wall of shame” at a school which had graffiti calling for the death of Roma, at a school attended by Roma children.

He said that people were intolerant, even more so of refugees. “A refugee, a man with Jewish roots knows very well that the Jews are eternal refugees, (a refugee) is not running away from something good. A refugee is a person that is suffering.”

The director of the Federation of Zionists in Bulgaria, Victor Melamed, said that, “the fear comes from the fact that you do not know someone”.

“When you get acquainted with the phenomenon, the person and the situation, there will no longer reason to be afraid. We must try to get to know these people and why they fled,” Melamed said, according to a report by Bulgarian National Radio.