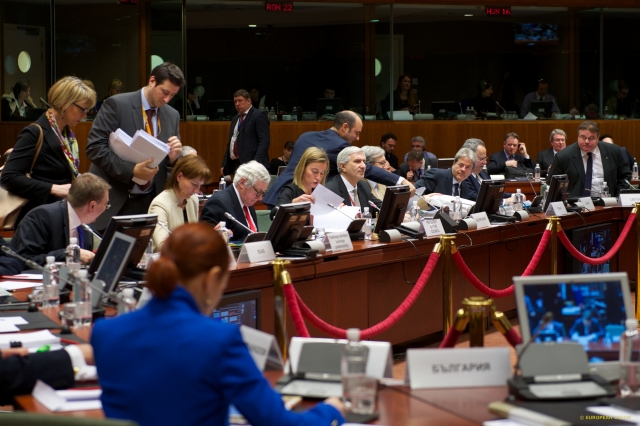 European Union foreign ministers agreed Monday to postpone further sanctions against Russia for a week to give time to a peace push to defuse the crisis in Ukraine.

EU ministers meeting in Brussels made it clear their decision to delay new sanctions against Russia did not mean repealing them. In remarks to reporters following the talks on Monday,  Foreign Policy Chief Frederica Mogherini said the move aimed to “give a space” for a hoped-for summit on Wednesday in Minsk.

What counted, she said, were results.

“Our point, our priority, is to have the situation on the ground improving. That is the starting point,” she stressed. “The situation on the ground has to improve, the cease-fire has to not only be agreed but put in place, implemented…. And when I refer to Ukrainian sovereignty, I also mean that it’s in the hands of the Ukrainian authorities – legitimate authorities – to decide to what extent the negotiations can go in all the points that were listed in the Minsk agreement.”

The EU ministers are waiting to see the outcome of a summit they hope will take place on Wednesday in the Belarusian capital among heads of state from Russia, Ukraine, France and Germany. The Europeans hope that will lead to a diplomatic solution to the Ukrainian crisis.

But previous cease-fire agreements have all but collapsed and skepticism is high among EU members like Britain.

“Until we see Russia complying on the ground, withdrawing troops, closing the border, stopping the flow of weapons, we can’t relieve the pressure in any way,” British Foreign Secretary Philip Hammond said.  “We need to keep that pressure up, until we see – not just words on paper but deeds on the ground.”

Even before Monday’s meeting, the EU had already decided to add more names to its list of people targeted for sanctions, in retaliation against Moscow’s alleged backing of Ukrainian rebels. Moscow denies claims it has sent troops and weapons to support the rebellion.

Some observers say the sanctions against Russia have not been terribly effective, since the standoff over Ukraine continues. Meanwhile, Spain says the sanctions have cost the EU nearly $24 billion.