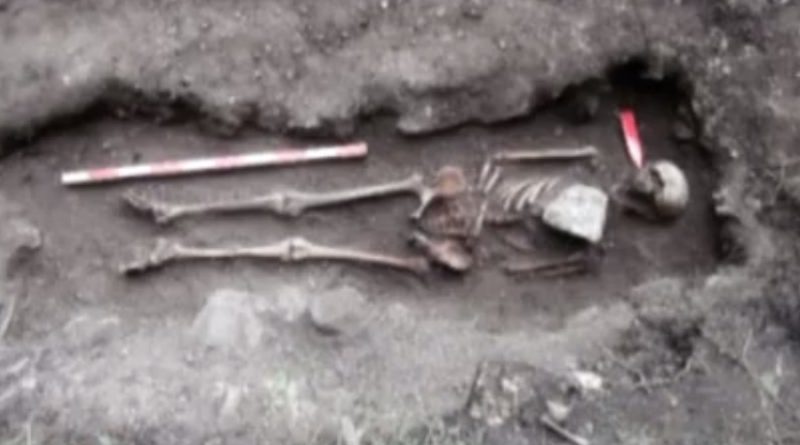 The summer archaeological season in Bulgaria customarily abounds with a wealth of discoveries – and the new trend, seen for the third year in 2014, of headlines being made by the finding of a “vampire”.

This year, it is the town of Vratsa in north-western Bulgaria that is getting into the act, after the excitement of claims around a so-called vampire in June 2012 in the seaside resort of Sozopol, followed by one in Veliko Turnovo, and with Perperikon – already famous for a trove of legitimate discoveries – not being outdone by finding a “twin” of the vampire in September 2013.

Bulgarian-language media reports said that a medieval vampire burial site had been found during excavations of an ancient fortress near Vratsa.

Unlike the previously well-known method of disposing of vampires by driving a stake through the heart, the funeral ritual of the “Vampire of Vratsa”, as local media are somewhat giddily terming it, involved a boulder from the mountain.

Settlement of the area of Gradishteto in Vratsa dates back at least to the Thracians. On this steep cliff, later came a Roman fortress and then a medieval village.

At the site, archaeologists have found the grave of an elderly man of a unusually tall height for the time, 1.8 metres.

The burial site testifies to the special treatment of the deceased. On his heart, archaeologists found a deliberately placed processed white stone, said to be part of rituals against vampirism.

Archaeologist Alexandra Petrova told Bulgarian National Television that placing a stone on the chest, notably the left side where the heart is, was part of such a practice, that could also involve stabbing with a stake or iron knife. The aim was to prevent the deceased’s return to the world of the living, which in turn also could be done by putting a pet cat or chicken across the body.

Such rituals would be carried out if the deceased was a stranger to the community, or loner or who had no one to watch over him at night. Another reason could be if the man, while alive, had been evil, thus prompting precautions against him coming back to cause mischief.

In the case near Vratsa, there was apparently double insurance. This involved tying the feet to make the dead stumble if trying to return to the world of the living.

Excavations in the Gradishteto area are continuing, the report said, with archaeologists hoping to find other graves to see if the “Vampire of Vratsa” is an isolated case or whether this was a special local funeral ritual.

Bulgaria can proceed with confiscation case against CCB’s Vassilev – ECJ