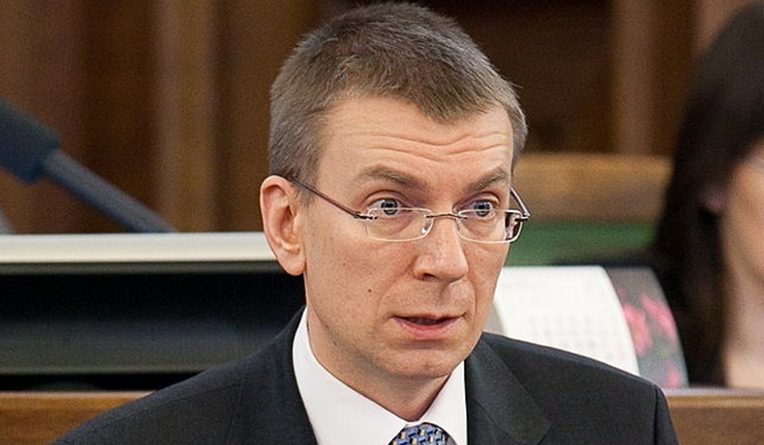 Latvia is 1,000 kilometers north of the separatist war in southern Ukraine. But what Latvia and Ukraine shares is a neighbor – Russia. And that neighbor has been cause for worries in the Baltic nation.

Russia has rebuilt is its navy in its Baltic outpost in Kaliningrad, Russian warplanes constantly test NATO airspace over the three Baltic nations, and in the past 18 months Russia’s army rebuilt an old base.

“[The] helicopter base [is] very close to [the] Latvian border and during the Ukrainian crisis, the number of helicopters, attack helicopters, stationed in that base has tripled,” says Rinkevics.

NATO says the Russian base has 100 combat helicopters, including Mi-28N Night Hunters and Ka-52 Alligators. Code-named Ostrov, the base is 32 kilometers east of Latvia’s border.

Rinkevics, who served 12 years with Latvia’s Ministry of Defense, said NATO has to counter Russia’s increased military might. He wants more NATO troops rotating through the Baltics for training and exercises.

The only NATO soldiers to visit have been American, but the Latvian expects several European countries will shortly send troops.

Next January, Latvia is to succeed Italy in assuming the presidency of the 28-member European Union. One third of Latvians speak Russian, and Latvia is expected to push Russia issues inside the EU.

The foreign minister said he supports an EU-US initiative to create a Russian-language television channel with accurate and balanced news. He says in recent months, Latvians have been shocked by what they see on Russian state television.

“The amount of propaganda, and sometimes open lies, I think they are really unprecedented. I think they are already surpassing even what you could see back in the 1970s and 1980s, as far as what I could remember from my own childhood about ‘bad America,’ and capitalists and imperialists and so on,” says Rinkevics.

The minister says that Latvia’s Russian speakers remain loyal to the Latvian state.

But he says the TV impact is different in Ukraine’s Russian-speaking area. To create peace in Ukraine, he says the Kremlin has to change Russian state television reporting.

“Let us consider this massive propaganda coming out of Moscow, encouraging, actually what you see on Russian TV [is] news that is actually open and direct encouragement to separatists to continue [destabilizing Ukraine].”

To end the fighting in Ukraine, he says, it is essential that Russia close its border with Ukraine and throw all its weight behind peace talks.

“Really, the first key, and the main key for a solution, would be if the Russian Federation really sits at the table, really makes some certain steps to discourage separatists, to encourage them to sit and talk and find a political solution,” says Rinkevics.

The Latvian foreign minister says geography dictates the small Baltic states are fated to deal with their massive eastern neighbor. At age 40, this Latvian politician realizes it could be a lifetime challenge.

“Let us not fool ourselves: Russia is not going to change for a long time. But we cannot allow them to change us,” says Rinkevics.

For now, the Baltic nations hope NATO deterrence will be enough to keep the Russian bear at bay.