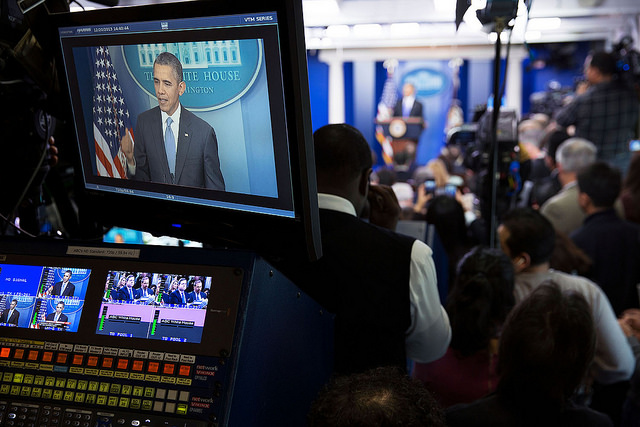 President Barack Obama said Russia is not abiding by the Geneva agreement to ease the crisis in Ukraine, and he is not hopeful the Russians will carry out the deal.

The president said at a Tokyo news conference with Japanese Prime Minister Shinzo Abe that Russia has not chosen what he calls the “wise path” and that stronger sanctions are possible.

Obama told reporters Ukraine has been taking the concrete steps agreed to last week in Geneva. That includes offering amnesty to armed pro-Russian separatists who have taken over government buildings in eastern Ukraine.

The president urged the Kremlin to do what it agreed to do in Geneva, including calling on the separatists to come out peacefully and recognize Ukraine’s willingness to negotiate.

Russian Foreign Minister Sergei Lavrov told state television that Russia would retaliate against threats to its interests the same way as it did in South Ossetia in 2008, which led to a brief war between Russia and an overmatched Georgia.

Hundreds of U.S. Army paratroopers landed in Poland Wednesday to, in the words of the Pentagon, “send a message” to Moscow and reassure nervous U.S. allies.

Ukraine has also decided to resume what it calls “anti-terrorist” operations against pro-Russians in the east.

Pro-Russian gunmen are demanding the right to hold referendums on splitting with Ukraine and joining Russia. A vote last month in Crimea led to the Russian annexation of the Ukrainian peninsula.