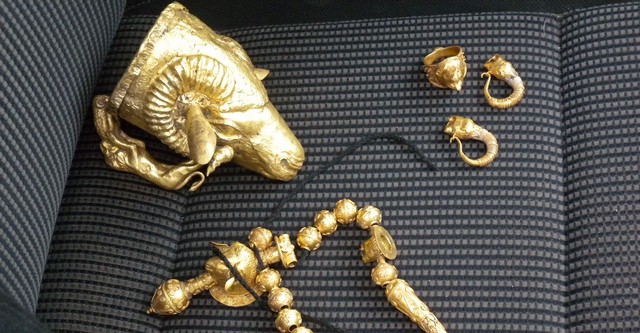 Bulgaria’s Interior Ministry said on April 24 that police seized several items suspected to be archaeological artefacts in the town of Dupnitsa, about 60km south of capital city Sofia.

The items seized by police were a large ring with a lion’s head mounting, a pair of identical earrings, a necklace and a cup in the shape of a ram’s head.

The police have asked for an expert appraisal, to determine the exact material that the items are made of and whether the items are genuine archaeological artefacts.

Initial assessments pointed that the items were crafted in the early Hellenistic style, which would date them – if genuine – as fourth or third century BCE.

The items were found in a car during a police operation, the ministry said, without giving further details. The 48-year-old driver has been detained for 24 hours.

The news comes only 10 days after the National Museum of History in Sofia was handed a cache of archaeological finds, including gold artefacts, some of them dating back to the third millennium BCE, seized by Bulgaria’s State Agency for National Security (SANS).

The cache included three unique golden necklaces, made of as many as 15 000 individual pieces – thought to be the second oldest golden treasure dug out in Bulgaria – and a marble slab with a relief of the Thracian horseman, dating to the second or third century CE, as well as two artillery guns and about 100 coins and items dating from antiquity to the Middle Ages.