Rival groups of protesters gathered outside the Presidency office in central Sofia on March 24 as a meeting of the Consultative Council on National Security to discuss risks to Bulgaria from the crisis in Ukraine got underway.

It is the second time in March that Bulgarian leaders have met to discuss Ukraine. Earlier in March, the cabinet security council – a body distinct from the Consultative Council on National Security, which is convened by the head of state, met to discuss the Ukraine crisis and the possible impact on Bulgaria.

Centre-right parties favour a strongly pro-European approach and have sharply condemned Russia’s illegal annexation of Ukraine. Far-right parties echo the Kremlin line by condemning the new government in Kyiv as composed of thugs and fascists.

The Bulgarian Socialist Party government and the party itself have struggled to come up with a coherent policy for public consumption, expressing concern about Russian intervention in Ukraine while underlining their firm opposition to any idea of serious EU economic sanctions against Russia.

While Bulgaria is not alone among EU states in opposing economic sanctions, with a handful of other EU states sharing the same view, its adamant line on the issue has frustrated EU leaders who favour a tough line in response to Moscow’s behaviour.

As senior officials and politicians arrived for the Consultative Council on National Security meeting, a group of anti-government protesters jeered cabinet ministers.

Far-right ultra-nationalist party Ataka had its own protest outside the Presidency while party leader Volen Siderov was inside at the meeting convened by head of state Plevneliev.

Siderov repeatedly has spoken out against Bulgarian involvement in sanctions against Russia and has called for Sofia to recognise as valid the March 16 referendum in Crimea on accession to the Russian federation.

Ataka supporters held posters and shouted slogans such as, among other things, “It was Russia and not the EU that freed us from the Turkish yoke,” “sanctions for Turkey, not Russia”, and “Bulgaria and Russia, Orthodox unity”.

Meanwhile, the socialist Speaker of Parliament, Mihail Mikov, has again cast doubt on the possibility of Bulgaria’s 42nd National Assembly coming up with a consensus resolution on Ukraine.

Recently, a proposal for Parliament to approve a resolution on Ukraine was removed from the National Assembly’s agenda after it was clear that the draft resolutions proposed by three out of four parties in Parliament were mutually irreconciliable.

“In this situation, it is obvious that it is difficult to come up with an overall position on Ukraine in the National Assembly. I do not know why Parliament should be pushed into the impossible,” Mikov said.

He criticised President Plevneliev’s explicit condemnation of Russia’s annexation of Crimea, saying, “it’s easy to be brave when you are a member of Nato, but let’s look at other countries that do not rattle their sabres as our president does”.

Mikov said that in Bulgaria, there were “many people who are pro-Russian”.

Tsvetlin Yovchev, interior minister and deputy prime minister, said during a visit to Washington DC that he had told Bulgaria’s US partners that the country would be an “extremely loyal and responsible ally through its membership of Nato and the EU”.

According to Yovchev, Bulgaria’s position was that Russia’s actions were unacceptable and could not be left without consequences, while there must be active efforts towards a peaceful solution.

He said that in Washington, there were varying opinions and proposals regarding a response to Russia.

Some included strengthening the presence of the US military and Nato in the Black Sea.

This scenario seemed inevitable, especially if Russia took action in southern and eastern Ukraine and Transdniester.

In such a scenario, Bulgaria, Romania and Turkey would become active participants, but, Yovchev said, no specific expectations and requirements had been addressed to Bulgaria.

He said that the crisis would be long-term and would affect Bulgaria.

The most serious and most likely threats were associated with the possibility of disruptions in gas supply to Bulgaria, while the imposition of economic sanctions on Russia would damage Bulgaria’s economy, Yovchev said.

These concerns had been shared with Bulgaria’s partners in the EU and US, Yovchev said. 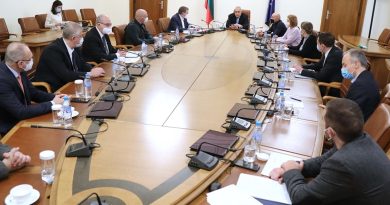