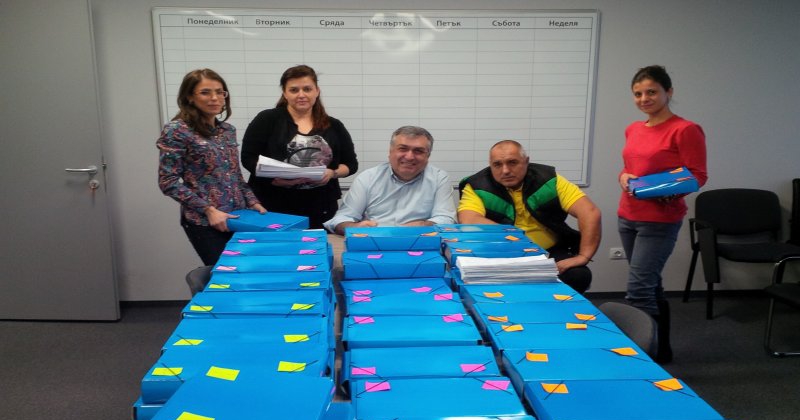 The initiative committee set up last month to gather signatures for a referendum on electoral rules in Bulgaria delivered its petition to Parliament on March 10.

Under Bulgarian law, Parliament has to endorse a referendum if petitioned by more than 500 000 people. In five weeks, the group says, its initiative has been backed by 561 528 people, but the bulk of that number came from Bulgaria’s largest opposition party, former prime minister Boiko Borissov’s GERB.

As recently as late February, statements coming from Borissov and the head of the initiative committee, law professor Georgi Bliznashki, suggested that the petition may gather more than a million signatures, insofar as each of them spoke of gathering more than the 500 000 signatures required by law.

Speaking to reporters over the weekend, Bliznashki said that his figures always took into account Borissov’s pledge of delivering more than 500 000 signatures to the initiative committee – which GERB did on March 9.

In January, Bulgarian President Rossen Plevneliev announced that he would ask the National Assembly to agree to the holding of a referendum on electoral law issues, with the vote to be held on the same day as Bulgaria’s European Parliament elections, expected to be held on May 25.

The three questions, suggested by Plevneliev, concerned the possible elections of some of the lawmakers by majoritarian vote, the introduction of electronic voting and whether Bulgaria should make voting in elections and national referendum compulsory.

Plevneliev’s idea was met with no small degree of contempt by country’s ruling axis, which has routinely clashed with the President (elected on GERB’s ticket in 2011, but not formally a member of the party) since forming the government after the May 2013 parliamentary elections – GERB, the party that won the most votes, found no willing partners to form a coalition of its own.

Comments ranged from criticising the questions posited by Plevneliev as too vague to claims that Plevneliev was attempting to “sabotage” the new Electoral Code (Parliament passed the law after a week of heated debates in February). Last week, the National Assembly delayed examining a motion on Plevneliev’s request.

The next stop is for Bulgaria’s Civil Registry office to verify the authenticity of the signatures before the petition is filed for debate on Parliament floor. Voices in the ruling axis – both from the socialists and the predominantly ethnic Turk Movement for Rights and Freedoms (MRF) – have already questioned the petition’s numbers, accusing GERB of using mayors elected on the party’s ticket to drum up support for the petition.

Speaking on March 10, Bliznashki denied the charges, saying the process was driven entirely by volunteers and was proof of the “enormous enthusiasm for the change in election rules.”

If the petition is found to have more than 500 000 valid signatories, the National Assembly will have up to three months (counting from the date that the petition was filed) to decide on the wording of the referendum question, but cannot block the plebiscite from going through. After Parliament agrees the referendum question, the President sets the date for the plebiscite – no sooner than two months and no later than three months after Parliament’s decision.

This timeframe makes the prospect of the referendum being held on the same date as the European Parliament elections possible, but unlikely, since it would require the National Assembly to formulate the referendum question within the next two weeks.

It is an outcome that the ruling axis can accept, given its opposition to the referendum in the first place. The two parties would not welcome any increase in the voter turnout, the government’s critics say, given the continued strong opposition to the cabinet headed by Plamen Oresharski, as evidenced by opinion polls.

Furthermore, the National Assembly could further influence proceedings with the timing of the motion on the referendum question, forcing Plevneliev to name a date in late summer, when many Bulgarians take their summer holidays.

Under Bulgarian law, for referendum to be considered valid, turnout must be higher than at the previous parliamentary elections – namely 51.33 per cent at the May 2013 elections. In this scenario, the referendum’s result is binding on Parliament, which must amend the laws to reflect the plebiscite’s outcome. If turnout is below that benchmark but higher than 20 per cent, Parliament must discuss the issue, but is not bound by the referendum results.

That was the outcome of Bulgaria’s first nationwide plebiscite since the fall of communism, held in January 2013, when Bulgarians were asked whether the country should develop nuclear energy by building a new nuclear power plant – the socialists, which initiated the petition, wanted the referendum squarely on whether Bulgaria should build a new facility at Belene, but the question was amended in Parliament, where GERB held a majority at the time.

Although just over 60 per cent of the voters voted affirmative in the referendum, turnout was just 20.2 per cent. Later in February 2013, in one of its last decisions before being dissolved to pave the way for early parliamentary elections, the National Assembly voted to keep the Belene plant project (shelved by the GERB cabinet in May 2012) on ice.

(Georgi Bliznashki, centre, and Boiko Borissov, second right, posing with the folders containing the signatures in support of the petition to hold the referendum, collected by GERB, on March 9. Photo: gerb.bg)