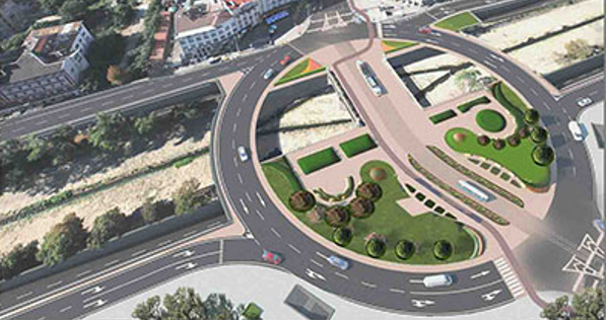 Sofia’s landmark Luvov Most (Lions Bridge) intersection will be closed to traffic for most of this year, owing to the major overhaul starting on February 15.

The 22 million leva (about 11 million euro) project is meant to remove one of the city’s worst traffic bottlenecks, which routinely produces congestion during the rush hour. Once the project is completed, in October, motorists will breeze through the new tunnel under the bridge in 18 seconds, as opposed to waiting up to 15 minutes, Sofia deputy mayor for transport Lyubomir Hristov said.

In addition to the tunnels in both directions, there will be a traffic circle above ground with two lanes, which will also speed up traffic, he said. Only trams will cross the bridge itself and a new cycling alley will be added – although the plans to have the alley cut sharply across the tram line has drawn some criticism for safety reasons.

Initially, the traffic circle was meant to have three lanes, but Hristov said that the extra lane was scrapped after studies showed it would only slow down traffic. The money saved on the third lane will be used to repair the Maria Luiza Boulevard stretch between the Lions Bridge and the Sofia Central Baths, he said.

The expanded bridge area will be open to pedestrians, with new green spaces and an early-20th century retro look, complete with benches and street lights, Hristov said.

The construction work will cause temporary traffic restrictions on Slivnitsa Boulevard from Hristo Botev Boulevard to Rakovski Street (between February 23 and May 17), followed by the complete closure of traffic on Maria Luiza Boulevard (between May 18 and July 1).