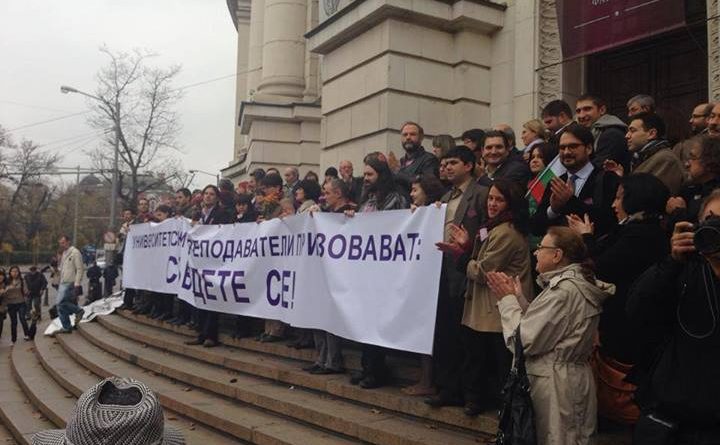 For the first time since the start of anti-government student protests in Bulgarian capital city Sofia last week, the focus shifted on November 1 from the main building of Sofia University to the Bulgarian Parliament across the street.

On the day that Bulgaria celebrates the “national enlighteners” – a collective term for all the revolutionaries, clergy and educators that played a key role in the Bulgarian Revival period and the independence fight against the Ottoman Empire – students marched on Parliament to demand the resignation of the Plamen Oresharski government.

Bulgarian media estimated the total numbers at the march at about 1000, making it one of the largest daytime protest since the start of anti-government protests in mid-June (although an official holiday, the day is not a public holiday – only students get the day off).

The protesters attempted to encircle the area around Parliament, where police were once again out in numbers behind the metal enclosures blocking access to the building for the past several months, disrupting traffic on several streets in central Sofia for several hours.

A smaller “counter-protest” of government supporters gathered meanwhile outside the St Alexander Nevsky cathedral. According to reports in Bulgarian media, some of the counter-protesters had been bussed in from the town of Pernik.

Speaking to Nova Televizia, the town’s socialist mayor Rossitsa Yanakieva denied the claims made by opposition parties that municipality employees were among those bussed in, saying that the transportation was organised by the socialist party organisation in the town.

As on other such occasions, several MPs from the ruling coalition, which includes the socialists and the predominantly ethnic Turk Movement for Rights and Freedoms, came out of the Parliament building to thank the counter-protesters for their support.

Eurostat: 30% of pensioners in Bulgaria at risk of poverty