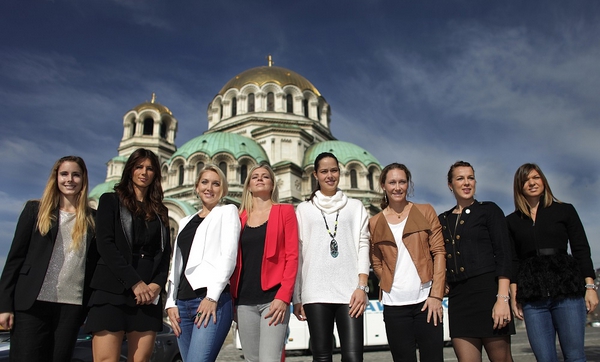 Bulgarian capital Sofia will play host to the WTA Tournament of Champions for a second year running in 2013, at the Arena Armeec Sofia between October 29 and November 3.

The end-of-year tournament, not to be confused with the Grand Slam-equivalent WTA Tour Championships (won for a second straight time on October 27 by Serena Williams), will feature eight players in a round-robin format, with the top two advancing to the semi-finals on November 2. The final is on November 3.

To qualify, players had to win at least one WTA Tour event this year, but fall short of qualification for the WTA Tour Championships. Two of the participants were granted wild cards even though they have not won any WTA Tour title this season – Serbia’s world number 16 Ana Ivanovic and home crowd favourite Tsvetana Pironkova (ranked 119th in the world after a disappointing year, in danger of finishing the season outside the top 100 for the first time since 2004).

Romania’s Simona Halep, currently ranked 14th in the WTA Rankings, tops the field and is the favourite to cap her outstanding 2013 season with a sixth title. Her toughest challenger is expected to be former world number one Ivanovic, a two-time winner at the WTA Tournament of Champions in 2010 and 2011 (she skipped last year’s tournament in order to play for her country in the Fed Cup final).

The competitors were drawn into two round-robin groups, both named using the old names that Bulgaria’s capital had in the past, on October 28. Halep will top the Serdika group, playing against Maria Kirilenko (who withdrew after two matches last year) and Anastasia Pavlyuchenkova of Russia, as well as Alizé Cornet of France. Ivanovic is the top seed in the Sredets group, which also features Pironkova, Australia’s Samantha Stosur and Russia’s Elena Vesnina.

Three matches will be played on the first four days, meaning that each competitor will have one day of rest. Tickets are sold online at eventim.bg – for the entire day, featuring three matches, during the round robin part of the tournament, then individually for each match for the semi-finals and final.

The matches will be played in the evening, starting 5pm local time (for the round robin matches). Public broadcaster Bulgarian National Television will show Pironkova’s matches live, as well as the first semifinal and the final. The rest of the matches will be shown live on BNT2.