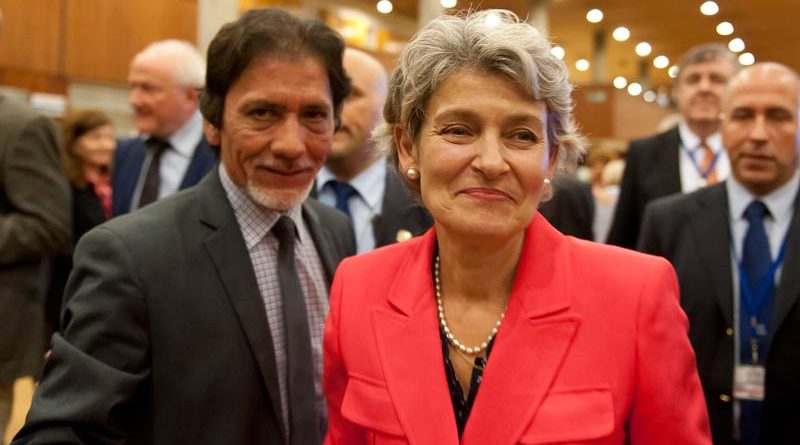 Bulgarian President Rossen Plevneliev is among leaders who have congratulated Irina Bokova on emerging from an October 4 meeting of UNESCOs’ executive board with a nomination for a second term as head of the organisation.

Bokova, UNESCO head since 2009, won a first-round victory over challengers Rachad Farah of Djibouti and Joseph Maila of Lebanon. She got 39 votes from the 58-member executive board.

The November 12 2013 UNESCO general conference is expected to confirm a second term for Bokova.

Plevneliev telephoned Bokova to congratulate her, saying that the executive board’s vote was proof of her professionalism, a success for Bulgarian diplomacy and firm evidence that Bokova had done very well in her first term as head of UNESCO.

The choice of Bokova was proof that Bulgarians could occupy high positions in reputable international organisations and deal successfully with the challenges that they faced, Plevneliev said.

He said that Bokova’s re-election would make it possible to successfully continue and complete reforms of UNESCO to optimise the organisation and improves its efficiency.

A particular priority for Bulgaria was the protection of the country’s cultural and natural heritage and the appropriate representation of this in UNESCO, he said.

Bokova also was congratulated by Boiko Borissov, prime minister from 2009 to 2013 and currently leader of the centre-right opposition party GERB, whose government campaigned internationally for a second term for Bokova, whose initial nomination was made by the Bulgarian Socialist Party-led tripartite coalition that was in power from 2005 to 2009.

Bokova’s background is with the Bulgarian Socialist Party, for which she was an MP, and was deputy foreign minister and foreign minister in a BSP government. She was failed candidate for the country’s vice-presidency on a BSP ticket in 1996.

Bokova served as Bulgaria’s ambassador to France and Permanent Delegate to UNESCO.

Bokova, speaking to Bulgarian National Radio, said that the vote was a victory for Bulgaria, its institutions, diplomacy, its President and the work done. She said that it was a vote of confidence for the four years she had been at the head of the organisation.

She said that her successes were the work done in the field of education, culture and preservation of the cultural and historical heritage, as well as the access to education and the new technologies for women and girls.

“All the reforms I undertook were evaluated according to their true merit by the Executive Bureau. No matter what measures I will take in the beginning of next year, when the member states present their priorities about the programmes we are to finance, in some way we will continue working and we will have to make some tough decisions,” Bokova said.

Her term has been attended by controversy, notably the 2011 decision to admit Palestine to UNESCO membership which led to a refusal by the United States to pay its contribution to the UNESCO budget, which makes up about 25 per cent of the organisation’s funding, while other controversies have included staff reforms.