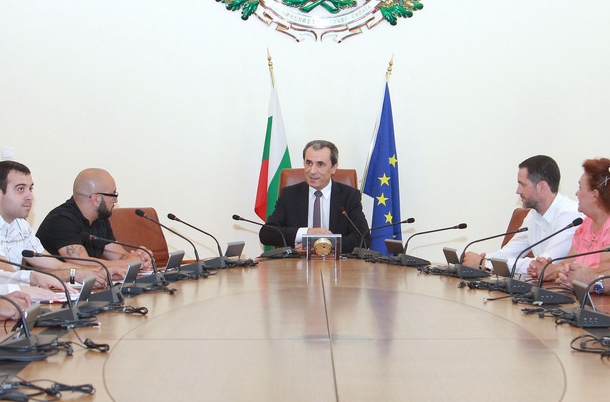 The American Jewish Committee (AJC) has become the latest body to speak out after an anti-Semitic remark by rapper Misho Shamara, a rapper who has been a regular feature in Bulgaria’s generally poorly-attended pro-government meetings.

In late July, in an interview with Bulgarian television station TV7, the rapper – also known as Big Sha – referred to Simeon Dyankov, formerly finance minister in the 2009/13 centre-right government – as “the most incompetent Jewish vermin”.

The statement, made in reference to the rapper’s support for budget changes by the Bulgarian Socialist Party government that came to power in May 2013 in spite of running second in the elections, resulted in complaints to Bulgaria’s regulator of the broadcast media, the Council for Electronic Media (CEM).

In an August 20 statement, the AJC said that it was concerned about the emergence of anti-Semitism on the Bulgarian political scene.

Referring to Misho Shamara’s anti-Semitic remark, the AJC said that “neither the interviewer at the time, nor the station afterwards, had anything to say about the outrageous slur”.

AJC Executive Director David Harris commented, “We are saddened and shocked that Bulgaria, a country widely known for its spirit of tolerance and mutual respect, would allow an incident like this to pass without any repudiation by the television station or public officials, though, to their credit, other civic leaders immediately condemned the incident.

“Moreover, it comes at a time when elements of the Ataka party, which is not formally part of the government coalition but offers its support to ensure a parliamentary majority, have also expressed xenophobic and anti-Semitic sentiments. Ataka, created in 2005, is widely viewed as an ultranationalist party that advocates for a very narrow definition of Bulgarian identity. In the most recent Bulgarian election in May, it was the fourth highest vote-getter in the country,” Harris said.

On August 13, CEM issued an overall statement addressed to the Bulgarian broadcast media as a whole, making no direct reference to the rapper or TV7, but appealing to journalists to “decisively” distance themselves from statements that could be classified as hate speech.