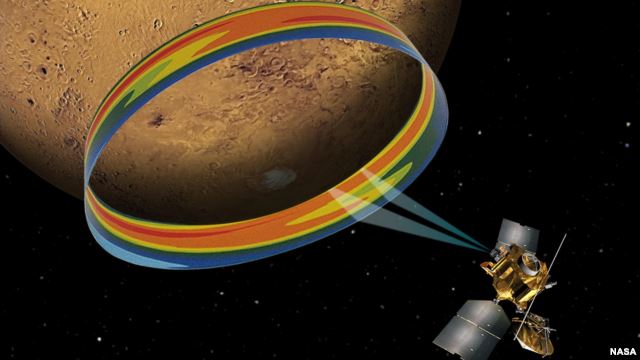 Scientists have long wondered why the surface temperatures on Mars rise and fall twice a day instead of once each as on Earth. The answer, according tonew research, may be found in water-ice clouds floating about 10 to 30 kilometers above the Martian equatorial surface.

The clouds resemble thin cirrus clouds on Earth and absorb infrared light coming from the planet’s surface. That absorption is enough to heat the middle atmosphere each day.

“We think of Mars as a cold and dry world with little water, but there is actually more water vapor in the Martian atmosphere than in the upper layers of Earth’s atmosphere,” said Armin Kleinboehl of NASA’s Jet Propulsion Laboratory in Pasadena, California. “Water-ice clouds have been known to form in regions of cold temperatures, but the feedback of these clouds on the Mars temperature structure had not been appreciated. We know now that we will have to consider the cloud structure if we want to understand the Martian atmosphere.”

Mars experiences a temperature maximum in the middle of the day, but also see a temperature maximum a little after midnight, said Kleinboehl, the lead author of the study, which appeared in the journalGeophysical Research Letters. The temperature swings can be as much as 47 degrees Celsius as detected by NASA’s Mars Reconnaissance Orbiter. These swings in temperature were found to be “dominant globally and year-round.”

These patterns on Mars were first seen in the 1970s, but were previously thought to occur only during dusty seasons.

“We were surprised to find this strong twice-a-day structure in the temperatures of the non-dusty Mars atmosphere,” Kleinboehl said.

Source: VOANews.com
(Photo: This graphic depicts the Mars Climate Sounder instrument on NASA’s Mars Reconnaissance Orbiter measuring the temperature of a cross section of the Martian atmosphere as the orbiter passes above the south polar region. Nasa)