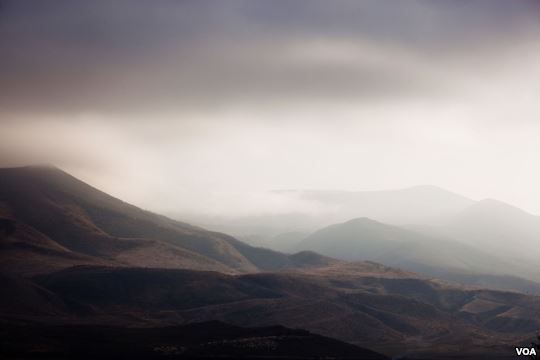 Almost two decades ago, the big guns fell silent in the war between Armenians and Azeris over a mountainous corner of Azerbaijan called Nagorno-Karabakh.

Today, the 1994 ceasefire trench lines remain frozen in place. But Azerbaijan holds presidential elections in October. Now, some fear this frozen conflict could reignite over Nagorno-Karabakh, a self-proclaimed republic that is not recognized by any foreign countries.

​The half-ruined mountaintop town of Shushi illustrates this ethnic divide. At the local music school, VOA chanced on a party – the songs, dances, food and cognac were all Armenian. Indeed, ethnic Armenians control Shushi, as they do all of Nagorno-Karabakh.

But nearby, two abandoned mosques, were reminders that this city – and all of Nagorno-Karabakh – is claimed by Azerbaijan, a Muslim majority nation.

On the mountain road to Shushi, a war memorial stands guard: an Armenian battle tank painted with a white Christian cross.

Across Nagorno-Karabakh, Armenians are rebuilding as if construction could solve the ownership dispute.

Ashot Ghoulian, chair of the National Assembly of Nagorno-Karabakh, said aid flows here from Armenians around the world.

“The Diaspora has a huge significance for the social economic development of Karabakh,” he said in the offices of the parliament of the self-proclaimed Nagorno-Karabakh Republic. “What our compatriots are sending from America, from European countries, from Russia, and the former Soviet states – all of this allows us to complete very serious economic projects.”

Diaspora aid paved Karabakh’s lifeline to the outside world – a curving mountain road to neighboring Armenia. To further cut Karabakh’s isolation, a new airport has been completed for Stepanakert, the region’s capital.

But it remains unused: Azerbaijan threatens to shoot down planes landing here. And Azeri President Ilham Aliyev has repeated vows to retake Nagorno-Karabakh, by force if necessary.

His military budget of $4 billion is almost the size of Armenia’s gross national product. This worries Ashot Ghoulian.

He said: “What’s happening with Azerbaijan, anti-Armenian hysteria, the arms race, and Armenophobia – I think all of this is postponing resolution of the Karabakh problem.”

At the front lines, cross border sniper fire kills about one soldier a month.

“There’s little likelihood in the near future of any breakthrough diplomatically or politically,” Giragosian said in Yerevan, Armenia’s capital. “There is an increasing risk of war, however. But interestingly, the danger is a war by accident, based on miscalculation, where skirmishes could spiral out of control.”

But Aleksandr Iskandaryan, the Director of the Caucasus Institute in Yerevan, predicts Azerbaijan will not risk a full-fledged military attack on Nagorno-Karabakh.

“These fortifications are very well built and well equipped,” he said, looking at a map of the ceasefire lines. “To go through with a front tank attack, it’s very serious. It will lose a lot of people. It’s quite serious.”

Children in Nagorno-Karabakh’s capital of Stepanakert grow up knowing that war is never distant.

At Middle School No. 3, newly rebuilt with diaspora donation, there is an honor roll of alumni killed two decades ago. It is a reminder of the danger that this frozen conflict could suddenly burn hot – and claim another generation of young men.