The European Central Bank says the economic fortunes in the euro currency bloc are continuing to shrink, but should advance modestly next year.

The bank kept its key interest rate unchanged Thursday at one-half of one percent as it looks for new ways to boost the eurozone’s faltering economy.

Bank president Mario Draghi said policy makers now are projecting the economy in the 17-nation euro currency bloc will contract six-tenths of a percent this year, slightly worse than first thought, but advance by 1.1 percent in 2014.

“The labor market conditions remain weak. Recent developments in economic sentiments survey data have shown some improvement from low levels. Looking ahead to later in the year and to 2014, euro area export growth should benefit from a recovery in global demand, while domestic demand should be supported by the accommodative stance of our monetary policy and by the recent real income gains due to lower oil prices and generally lower inflation,” said Draghi.

The eurozone is mired in an 18-month-long recession, and its jobless rate has reached a record 12.2 percent. Some analysts say the eurozone’s plight has diminished prospects for the global economy.

With more than 19 million workers unemployed in the eurozone, European officials are searching for ways to boost job growth.

Draghi says officials are talking to other European Union institutions about how more loans could be made to small businesses, as a way to encourage them to hire more workers. Banks have had trouble getting credit themselves and have been reluctant to make loans to businesses with weak prospects. 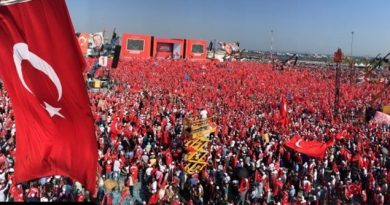 Massive rally in Turkey in support of Erdogan