Amid the frustration, speculation and enduring trauma in these past six months since the July 18 2012 suicide bomb terrorist attack on a group of Israeli tourists at Bourgas Airport in Bulgaria, there is the risk that awareness of the victims themselves may slip away among the wider public; so let us remember them first.

There is another name, that remains unknown – that of the bomber himself, or the bomb, if the theory that the explosives were detonated remotely is correct. We have all seen his face, or at least the computer-generated version distributed via Interpol, and that of an alleged accomplice, but the only identities known are the fake ones on documents recovered at the scene.

It was a day of vivid imagery, not only in the swift reactions of Israeli and Bulgarian medical and emergency services, not only in the en masse turnout of Bulgarian state and government leaders at the scene, not only in the shocked faces at terrorism touching Bulgaria for the first time in decades, but also – unfortunately – in the disrespect and unprofessionalism of some sections of Bulgaria’s media that printed photographs that included body parts.

But images fade in the public mind and the story has become a patchy one, as investigations remain behind the scenes, bar the occasional – sometimes contradictory – public statements and the speculation and blame apportioned from some quarters.

In recent days, the chief secretary of Bulgaria’s Interior Ministry visited Israel to meet senior colleagues in law enforcement and the security services. Whatever came out of that visit, which reportedly included comparison of notes on the investigation, has not been made public.

Some days earlier, a lengthy and frankly reckless interview given by a Bulgarian member of the investigating team cost her her job on the team. Her disclosures were reported extensively but derided as inaccurate by Bulgaria’s Interior Minister, Tsvetan Tsvetanov.

Ahead of a January 17 2013 meeting of European Union ministers of interior and justice in Dublin, capital of Ireland, current holder of the rotating presidency of the Council of the EU, Tsvetanov was to update his colleagues on progress in the investigation.

Although Israel was quick to apportion blame for the terrorist bombing to Hezbollah and Iran, citing its own intelligence sources and underlining the attack in its appeal to the EU to declare Hezbollah a terrorist organisation, Bulgaria has been more circumspect (and Iran, for the record and somewhat predictably, has rejected as untrue allegations of its involvement and instead alleged that the bombing was a false-flag operation by Israel itself).

Sofia, in turn, has underlined that it wants to be absolutely certain on the basis of evidence before pointing a finger. Bulgaria also has been progressively less forthcoming in speaking about the investigation. Initial statements by senior figures such as President Rossen Plevneliev and Tsvetanov about forthcoming details about the attack have gone unfulfilled.

Commentators have been found to come forth to suggest that the attack was not the work of Hezbollah but of Al-Qaeda; others have suggested that it was the work of members of Hezbollah, but not working for their own organisation but on a direct commission from Teheran.

The terrorist attack has not weakened, but perhaps to some extent even solidified, the good relations between Bulgaria and Israel.

Soon after the attack, the two countries’ tourism ministers exchanged visits, and the statistics showed a recovery in the number of visits to Bulgaria by Israeli tourists, after a brief downturn after the attack. Israel has been a market of growing significance for Bulgaria in recent years.

Israel also reached out to offer the family of the Bulgarian who died in the attack a visit to Israel, while Jewish organisations offered financial help to his family. Kyosev’s funeral had proved a blunder for Bulgarian authorities, who failed to send anyone of rank to attend the ceremony. Domestically, this earned a rebuke to the government with political detractors alleging (unfairly, it must be admitted) that his death had been ignored because he was a Muslim.

This was not the only political point-scoring attempted at the expense of the government – some critics said, in an exercise in pretzel logic, that the bombing was repayment for Foreign Minister Nikolai Mladenov’s cordial relations with Israel and his outreach to the Muslim world in the Middle East and North Africa.

In Israel, a few months ahead of the blast, media noted that prime minister Benjamin Netanyahu had spoken of a “regional alliance” involving Israel, Cyprus, Romania, Greece and Bulgaria. Certainly, there has been progress in civil defence co-operation, to say nothing of advances in co-operation, notably with Bulgaria, in military matters, including training.

Israel has faced changing dynamics in recent years, especially in regard to its deteriorating relations with Turkey. In the light of this, drawing closer with Greece and Cyprus, with which historically Jerusalem has not had good relations (to say the least) is a logical strategy. There are various aspects to this, for example the contest regarding resources off the coast of Cyprus, in which Cyprus and Israel have found common ground in securing, against Turkey’s claims.

In regard to bilateral relations between Bulgaria and Israel, while they should not be overdrawn as perfectly harmonious, the two countries now not only have in common a series of shared interests but also a shared grief. The bomb blast of six months ago today added this new emotional element, and ironically, ahead of this year 2013 in which Bulgaria and Israel join in commemorations of Bulgarian society’s intervention in World War 2 against Nazi directives to send Bulgaria’s Jews to the death camps of the Holocaust.

In the weeks and months after the July 18 2012 terrorist attack, information about what happened has been outpaced by speculation.

Early on, in August, Bulgaria’s Interior Ministry indicated that while the group of terrorists had come from outside the country (there have been conflicting reports about how many members the group had and how long they spent in Bulgaria ahead of the attack) the bomb itself probably was assembled within Bulgaria.

An isolated report of a Bulgarian witness who said that he recognised someone involved in the attack as an acquaintance who professed radical Islam went unconfirmed, although it reportedly was among the many leads followed up by Bulgarian investigators. The message from Sofia consistently has been that the bombing was the work of foreigners, and no one has contradicted this.

Occasional claims that the bomber was Mehdi Ghezali have also gone unconfirmed, including by Sweden, which has him in custody.

In August, reports said that Israel had intercepted an increased stream of phone calls between Lebanon and Bulgaria ahead of the attack. The July attack also was said to have similarities to one thwarted in January 2012 after Israeli security services alerted their Bulgarian colleagues. Similarities also were seen in the behaviour of the Bourgas Airport bomber and a suspect arrested in Cyprus after authorities in Nicosia were approached by Israeli intelligence services. The arrest in Cyprus, after Israeli targets on the island had been scouted, took place some weeks before the Bourgas attack.

In the investigation, at least in regard to details known to the public, the most significant frustration is the lack of information about the bomber. In addition to the identikits, information about his DNA has been forwarded to several law enforcement and intelligence services but apparently he has remained a cipher.

The prosecutor who gave the long interview in January 2013 said that a new computer-generated image of him had been made and distributed to other services but not made public, but the problem with the claims made in that interview is that it has been repudiated by Tsvetanov as riddled with inaccuracies. Similarly, there is no confirmation that her claim that the true identity of an accomplice is known. Nor of her claim that a SIM card from a Moroccan provider was part of the investigation.

January 18 2013 finds the public no closer to closure on the Bourgas Airport terrorist attack, and it remains in the hands of investigators and the authorities when that clarity will come.

Bulgaria rejected as untrue reports in the Israeli media on January 18 that during a visit the previous day to Israel, Bulgarian Foreign Minister Nikolai Mladenov had handed Israeli leaders a report naming Hezbollah as behind the Bourgas Airport terrorist attack.

Foreign Ministry spokesperson Vessela Tcherneva told Bulgarian National Television: “No, there is no such report. Indeed, Minister Mladenov was on a visit to Israel yesterday. The talks held during the visit were focused on a series of bilateral issues. Of course, the investigation of the terrorist attack in Bulgaria was discussed, too. It is part of our agenda, but the results of the investigation are not ready to be announced in public and thus there is no handing of any kind of report”

“The major topic for discussion, for which Minister Mladenov went to Israel, was rather connected to the upcoming marking of the 70th anniversary since the rescuing of the Bulgarian Jews. And of course, the issue about Bulgarian workers, who go to Israel under the bilateral agreement signed between the two countries, was discussed, too,” Tcherneva said.

“There is big progress in the investigation. No one was authorised by me to comment on this issue and no one from the government has done so. President Rossen Plevneliev is also informed about the investigation. We still have a lot of time to work on this case. I repeat – there is big progress. There will be official theses and commentaries on the case when there is indisputable evidence. How many times should I tell you? I will not comment on what the media say.” 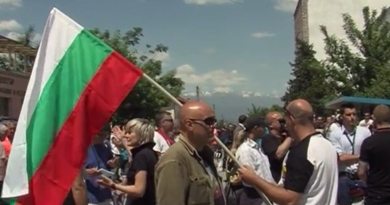 Covid-19 in Bulgaria: In past day, fewer than 1% tests positive