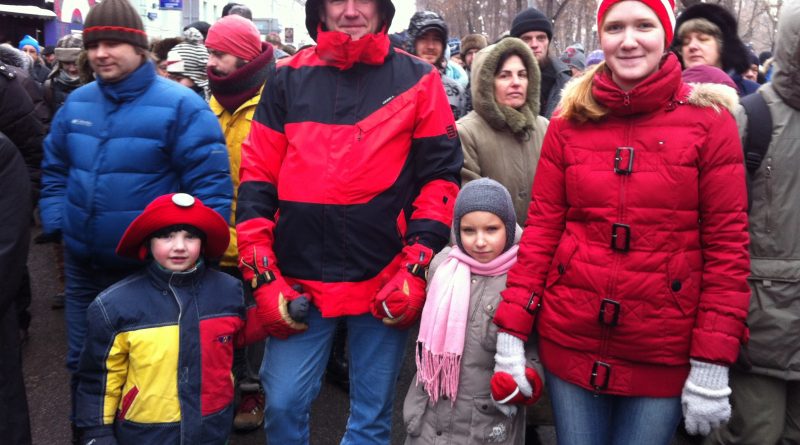 During my two-week vacation in the United States, American friends again and again looked at me intently, and then asked: How do Russians see the new ban on Americans adopting Russian children?

During the last three months of 2012, the Kremlin read out a steady drumroll of American and international organizations or programs expelled from Russia: USAID, NDI, IRI, UNICEF and Nunn-Lugar. But, for the Americans I talked to in New York and New England, the Kremlin’s clear anti-America message got lost in this murky alphabet soup.

The breakthrough came with the adoption ban. That put a human face on the Kremlin’s calculated xenophobia.

In simple terms, Russian politicians are sacrificing the futures of 1,000 Russian orphans – the number adopted by American parents last year – to make a political point.
Take that, America!

Over eggnog at a New Year’s Day party and over breakfast at my sons’ New England college, Americans gingerly asked me: What kind of people would do that?

To my relief, I found insights Sunday afternoon while walking in an immense column of Muscovites protesting the adoption ban.

After interviewing half a dozen walkers, I concluded that I was covering “The March of the Normal People.”

In contrast to earlier demonstrations, these were Moms and Dads, Grandmothers and Grandfathers.

This was not “the creative class” that spiced up past demonstrations with costumes and skits.

Nor were these the chronically unhappy, brandishing red or black flags tacked on baseball bats.

Sunday’s protesters were middle aged and middle class, the mainstream, the building blocks of society. They were people deeply involved in what is often the world’s most challenging profession: parent.

In American terms, they could have stepped out of a meeting of the Parent Teachers Associations, the volunteer groups that advise local schools in America.

These Russians had no problems with light snow and the -10C temperatures. In Moscow, parents know how to sensibly double fold their scarves, and don warm hats, boots, coats and gloves before stepping outside for two-hour walk on a mid-winter afternoon.
They did not chant the standard protest slogan of 2012: “Russia Without Putin.”

Instead, they chanted something more damning: “Pozor” – “Shame.” They carried posters with portraits of their parliamentarians, also stamped: “Shame.”

They chanted: “Take Your Hands off Children.”

Ekaterina, the 39-year-old mother of a son, carried a sign reading: “Don’t take revenge on children.”

“I’m here because I am against yet another cannibalistic law voted for by the Duma,” she said, referring to Russia’s parliament. “The deputies used children as instruments in their political game.”

A few minutes later, Anna Glukhova, the 40-year-old mother of a daughter, said she found it shocking that the Duma banned adoptions to retaliate against the United States Congress for passing a bill demanding justice in the prison death of Sergei Magnitsky, a Russian lawyer for an American hedge fund.

“I think that it’s very bad to defend murderers of Magnitsky with our orphaned children,” said Glukhova, the deputy director of a trading company who marched with her husband.

Flowing up out of metro stations, at least 25,000 people turned out for the “March Against Scoundrels,” the largest protest turnout since President Putin’s inauguration last May. Much of the population of Russia’s capital is indifferent or hostile to the President. In March presidential, Moscow was one of the few places where he did not win a majority of ballots cast, winning only 47 percent.

The moderate nature of Sunday’s protesters contrasted with the radical words of ruling party deputies. The deputies’ extremist views highlight a deepening divide between urban Russians and their government.

In advance of the march, Andrei Isayev, a leader of the United Russia ruling party, warned on the party website about citizen “hysteria” over the adoption ban.

“All the enemies of Russian sovereignty have revealed themselves as ardent supporters of American adoption,” Mr. Isayev, a member of the party’s general council, wrote before the protest. They “will go out to march for the right of unrestricted export of Russian children to America.”

“Let’s look attentively and remember the faces of the organizers and active participants of this march,” he wrote, calling Sunday’s event a “March of Child Sellers.” “Our task in the coming years is to drive them to the farthest edge of political and public life, to the middle of nowhere.”

Yekaterina Lakhova, the United Russia deputy who sponsored the adoption ban last month, told Kommersant FM as the march began: “I am especially surprised to see people gather at such a large action in support of American business – because for them, our children, Russian children, are factually, let’s put it this way, an object of trade.”

After the march, Evgeny Feodorov, a ruling party deputy, warned me in an interview that it is highly possible the Russian children are cut up in the United States for the organ trade.

State-controlled television chimed in with Soviet-style slant.
Dmitry Kiselyov, presenter of “Vesti Nedelyi” or “News of the Week,” showed images of the march, warning viewers: “They urge everyone to protest against a ban on exporting children.”

For the folks back home and around the world, here is what is happening in Moscow:

On one hand, the Kremlin is continuing its year-long anti-American campaign, believing it can shore up support among rural, small city and Soviet generation Russians, the people who get most of their news from state-controlled television.

On the other hand, the Kremlin seeks to focus attention on “foreign causes” for Russia’s looming demographic decline. Because of a dearth of babies born during chaotic years that followed the collapse of communism in 1991, the number of fertile age Russian women is starting to shrink.

A believer of Alice in Wonderland demographics, Lakhova, the ruling party deputy, warns that American adoptions over the last two decades represent a small city lost for Russia.

But in light of Russia’s sky high emigration and abortion rates, the American adoptions of 60,000 Russian orphans are, in reality, a drop in the bucket.

It is increasingly unlikely that Russia’s television viewers will be exposed to this mathematical reality check. In a move that would bring television news closer to the Soviet model, Duma deputies are debating a law that would ban anyone with a foreign passport, including Russian citizens, from criticizing the Russian government on television.