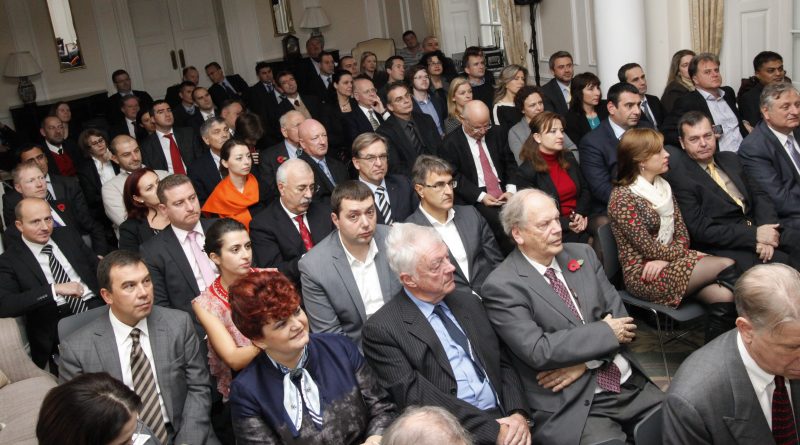 Generally positive views of the future of the business environment in Bulgaria – along with some concerns about bureaucracy and other forms of red tape – emerged at the first in a series of “Brits in Bulgaria” business lunches hosted by the British Bulgarian Chamber of Commerce (BBCC), at which three leading executives gave presentations about the banking, M&A and energy markets.

The presentations were given by Stefan Felstein, country manager of Citibank, Richard Clegg, managing partner of Wolf Theiss and David Archer, managing director of Melrose Resources.

Felstein told the BBCC meeting that Bulgaria has a “standard” two-tier banking system with a regulator, Bulgarian National Bank, which licenses, supervises and investigates all banks and non-banking financial institutions.

There are 31 banks operating in Bulgaria, broadly split into three groups – the five large banks, the middle-sized local banks (the largest group) and the branches of international banks.

In H1 2012 the capital adequacy ratio (CAR) of the Bulgarian banking system was 16.7 per cent compared to the 12 per cent required by central bank BNB.  The CAR represents a “buffer” which gives the bank the financial strength to weather shocks.  Most countries have a limit of eight to nine per cent for this ratio and most countries in Central and Eastern Europe are well ahead of this, including Bulgaria, giving confidence in the resilience of the sector, Felstein said.

In H1 2012 the liquidity ratio in the Bulgarian banking system was 26.6 per cent, on an upward trend for the past several years, which is a positive thing, creating more lending opportunities and more flexibility in the sector.

Much of this came from the real estate sector and in addition, the construction industry and non-collateralised loans in SMEs were increasingly non-performing, Felstein said.  These trends were mitigated by the ability of the system to absorb this increase.

There are four levels of classification of non-performing loans so the data is very subjective, he said.

So long as the banks have sufficient profit within their normal activities to absorb the impact of writing off these debts, then the system remains stable, but to the extent that they reduce profitability, these loans impair the flexibility in the system and reduce their ability and willingness to make further loans.

Asked a question about the growing number of non-performing loans, presumably supported by reasonable assets and what the process would be for these to be sold on, Felstein said that the question really was what the collateral was.

Much of these assets are in real estate and in the aftermath of the bubble bursting, the question was what are reasonable values for these properties today.

There is no general information about who in fact has financial difficulties and what is the value of their underlying assets.  The discrepancy between current and original valuations depends heavily on original deal date, he said, adding that in the non-performing portfolio, there were a lot of loans which have no collateral at all.

Asked how Bulgaria would be impacted if Greece left the euro, Felstein said that it was too difficult to forecast whether Greece would leave the euro.

Greek assets are about 22 per cent of the banking asset base and Bulgarian subsidiaries of Greek banks were well capitalized, like the rest of the Bulgarian banking sector.

He said that regulation was strong in Bulgaria. The Greek banking subsidiaries in Bulgaria that remain are “the jewels in the crown”, have ultimate value and the most likely option was that they would change ownership rather than collapse, he said.

Clegg said that the mergers and acquisitions (M&A) market in Europe had declined in Europe since 2007 for obvious reasons.

However, the share of Central and Eastern Europein M&A deal volumes has remained steady, meaning that the markets have not become relatively less attractive.

Within the region, there is on average 250 to 300 deals monthly and in Bulgaria, the number of deals in 2011 was close to pre-crisis levels (although the value of deals remains depressed), Clegg said.

The macro-story for Bulgaria is not bad, he said.  Both Bulgaria and Romania are decoupled from the G7 economies which drag down the overall EU performance, but there is a benefit from the EU framework and the Bulgarian tie to the euro.

Eastern Europe remains growing and in transition.  It is now a safe place to do business, Clegg said.

There were four main trends in Bulgaria’s M&A market, he said.

Major inbound deals to Bulgaria in 2011 were focused on the cash-generating sectors, manufacturing, energy and pharmaceutical.  This is driven by the history of business in the region.  In Western Europe and the US, family-owned businesses generally result in the strongest return on equity, Clegg said.

Nevertheless, family firms in the mid-capitalisation range have done well because they were well-managed and unleveraged when the crisis hit and so remain very attractive “targets” for inward investment.

Both of these features mean that investments succeed best when positions are taken together with the existing owners to leverage their experience and relationships.

“Locking in the founder” is a key issue and also offers lower entry costs and staged risk by the use of leveraged ratchet mechanisms, Clegg said.

On the bad loans issue, Clegg said that the NPL market may have now started driving M&A, but this is very recent.  Hedge funds are starting to show interest in Bulgarian real estate.  Unicredit and Wolf Theiss established units for this kind of deal in 2012, but mostly banks chose to renegotiate with their borrowers and to try to wait out the situation, he said.

Melrose Resources’ Archer spoke of the importance of local partnerships, and the veteran of doing business in Bulgaria added, the key aspect of strong supplier relations.

He told the meeting about the Galata Field project. The field was discovered in 1993 and a 25-year production concession was granted 10 years later. Production started in June 2004 with a platform in 35m of water.  Production is now suspended while the potential of storage is explored.

The platform was built in Varna.  Local resources are key to the success, Archer said.  It is a small field (2 bcm of gas) and not interesting to a major player.

Two further fields had been found and developed  – at Kaliakra and Kavarna – both very small fields and developed with innovative decisions to manage cost and infrastructure for a resource with a short life, producing back to the main platform to sustain the overall field life. Melrose continues to prospect, starting with drilling in Kamchia, Archer said.

The strategy is to continue to develop small surrounding fields to keep working the implemented infrastructure as far and as long as possible, he said.

Regionally,Melrose comes ashore at Varna and enters into the Bulgargaz distribution system.  It also supplies a second, independent transmission company.

Melrose was continuing to seek opportunities to leverage its facilities and expertise (and the cost effectiveness) of its Varna resources onshore, building a production facility for pre-assembled plant now installed in Egypt and producing oil and gas, having been commissioned by the Bulgarian team.  The core team of roughly 40 is a key asset to be leveraged and sustained, he said.

Strong supplier relations are also key.  Long term relations, particularly in transportation services have been key to their success.  The British also had provided a very strong source of support, Archer said.

Responding to a question from the audience about what would make Bulgaria a better environment for British businesses, Clegg said that large British manufacturing groups should be very attracted to Bulgaria where there were strong targets supported by the government.

Costs in Bulgaria were now comparable to Asia, transport is easier and it is an EU country, so for British companies, Bulgaria should now be very attractive, Clegg said.

Archer said that Melrose had had extraordinary support from the UK embassy and wanted more of the same.

Terms and conditions are as good as anywhere else in the world here, Archer said.  The problem is actually doing business because of the amount of bureaucracy and documentation required.

UK ambassador Jonathan Allen told the meeting that the embassy would and did engage with specific investors to highlight issues through news conferences, events and sharing of experience to highlight UK activity and investment and build relationships.

With Bulgaria having the highest concentration of family businesses in the EU, the British embassy has been trying to encourage Bulgaria to work with the UK to lobby together in Brussels to reduce the regulatory requirements for micro-businesses, he said.