The eve of the Advent Fast for Bulgaria’s Orthodox Church leaders found them in anything but the mood of quiet contemplation intended by tradition; in contrast, blood-curdling allegations were flying in the power struggle to be Patriarch.

Plovdiv Metropolitan Nikolai has a history of mental health problems and while he was crying over the death of Patriarch Maxim, the faction who for now have won the battle to temporarily lead the church were preparing a feast and poised to pour expensive whisky.

The two allegations in the paragraph above, wholly unsubstantiated by any evidence whatsoever, were among the subject matter for rival media reports in the aftermath of the Holy Synod meeting that saw Varna Metropolitan Kiril elected acting head of the church and Nikolai decamp for 40 days of mourning over the death of Maxim.

Nikolai’s website portrayed him as a devout ascetic, steeped in piety while the Kiril camp were greedy for power and secular luxuries. Newspaper Show, even by the abysmal standards of Bulgarian newspapers hardly a paragon of journalism, trumpeted on its front page a quote that it attributed to Kiril: “Nikolai of Plovdiv IS MAD”. 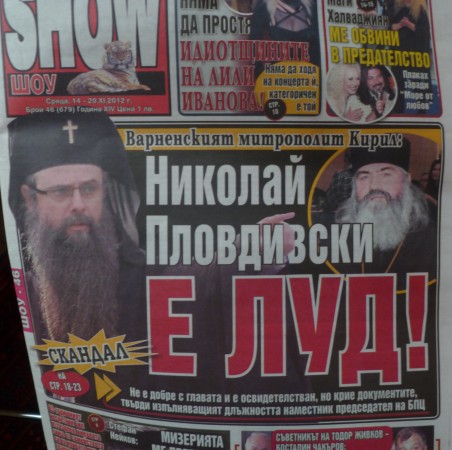 Thus it was that November 14 found eight out of 14 metropolitans gathered at Holy Synod headquarters in Sofia. Two metropolitans are not in Bulgaria, while four absented themselves – Nikolai (who had said he would not attend because he was in mourning) and three metropolitans seen as close to him: Kalinik of Vratsa, Ignatii of Pleven and Grigorii of Veliko Turnovo.

The Nikolai camp may not have been there, but the issue that they had raised was. This camp had alleged that Kiril’s election as acting Patriarch was illegal, for lack of sufficient votes, and to this was added the announcement by Grigorii that he was withdrawing the signature to be appended to the minute of Kiril’s election.

After the Synod met, Kiril declined to answer the questions with which Bulgarian journalists besieged him, saying that he would make a statement later in the day on public broadcaster Bulgarian National Television. Ahead of the meeting, he had appealed for unity, an appeal that in the current emotionally charged circumstances seemed somewhat Quixotic.

A statement by the secretariat of the Holy Synod issued in the afternoon said that the Synod had considered the question of the legality of Kiril’s election as temporary head of the church and found there to have been no problem.

This emerged amid the noise of pro-Nikolai websites (still undeterred by the fact that at 43, Nikolai is by church rules seven years too young to be elected Patriarch, unless this battle is going to go on much longer than the four months intended) proclaiming that Kiril was merely a decoy for the actual candidate that the rival camp would eventually put forward.

While most metropolitans have been coy on the question of whether they are candidates, saying that this matter will be decided by divining a Divine decision, one metropolitan – Yoaniki of Sliven – said for the record that he would not be prepared to be a candidate.

This means that of the 14 metropolitans, there could be only 11 possible candidates. Nikolai, as noted, is too young. Ambrosii of Silistra does not meet the requirement of having been a metropolitan for at least five years. With Yoaniki’s withdrawal, the field is narrowed to a theoretical number reminiscent of the wide field of Republican candidates in the US elections several months ago.

Speaking of secular politics, that has come into all of this too. The right-wing Democrats for a Strong Bulgaria has called for the Patriarch to be someone with no background of collaboration with Bulgaria’s communist-era State Security secret service. Should such a principle be brought into being and be applied, that would leave only one of the eligible metropolitans standing, Gavril of Lovech.

The opposition Bulgarian Socialist Party on November 13 accused ruling centre-right party GERB of seeking to interfere in the choice of the Patriarch.  On November 14, the head of the Directorate of Religious Affairs, Emil Velinov, said that he had been ordered that morning by Prime Minister Boiko Borissov that the state should not intervene in any way in the matter.

“I believe that the Holy Synod of the Bulgarian Orthodox Church will find the strength and will solve the problem in the best way for the church and the people,” said Velinov, although Bulgarian media noted it had been him who in recent days had said that the rules of the church could be changed to remove the age requirement and thus make Nikolai eligible to be Patriarch.

Lest the media had not fully understood what Velinov was sent off to tell them, Borissov emerged after the Cabinet meeting to say that he had told him that “one word concerning the election of the Patriarch of Bulgaria would cost him his job”.

Borissov went on, “for years the communists interfered in the church, brought it to the point that two-thirds of those in authority are agents of the former State Security. Our government does not do that.

“We build churches, monasteries, renovate them for many millions,” Borissov said. “We have no candidate, nor do we support or want in any way to be involved in this choice. That is why I warned him (Velinov) in front of all the ministers today, and the colleagues – this is the business of the church.”

Specialist church website Dveri, meanwhile, made clear its concern about the way matters were being handled.

In an article reflecting on the content being posted on the website of the Plovdiv diocese, it said that an article saying that Nikolai had walked out of the November 10 Holy Synod election meeting because he was offended at the planned feast and whisky “is already the third version of why the youngest metropolitan demonstratively left the meeting in question”.

Nikolai’s repeated assertion that he would consult Maxim whenever there was a question, Dveri’s article said, sounded like spiritualism.

“Similar yellow writings in themselves do not deserve attention, but the fact of their publication on the official website of the Plovdiv diocese says that we are entering a very bad phase of church life.”

This sort of material was unworthy because of, among other things, the personal desire to hurt. “Such an approach is frowned on even in secular political battles. The bad thing is that they undermine not only the initiator but also the whole church, which becomes a laughing stock for people,” the article said. 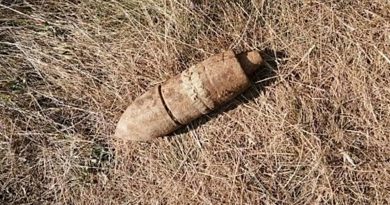