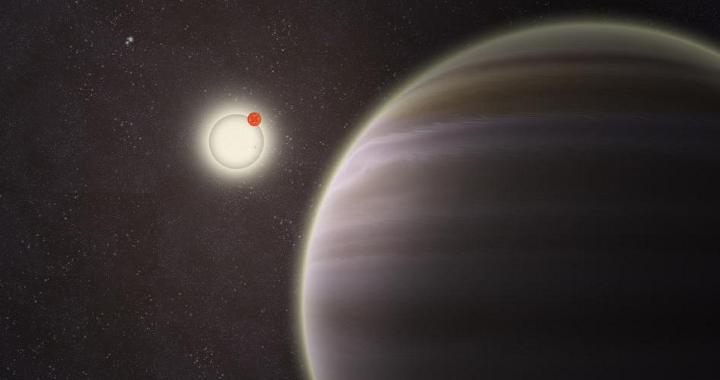 Imagine if four suns rose and set every day.

That could be the reality on the newly discovered planet, PH1 (Planet Hunters 1).

Citizen astronomers contributing to the PlanetHunters.org website discovered PH1 with the help of a Yale University-led team of international astronomers that enlists the public to review data from NASA’s Kepler spacecraft for signs of distant planets.

PH1 orbits a double star, which in turn orbits a distant pair of stars. It is the first reported discovery of a circumbinary planet in a four-star system, according to a press release issued by the Jet Propulsion Laboratory in Pasadena, California.

The planet is estimated to be a bit larger than Neptune and, like Neptune, is believed to be a gas giant. PH1 orbits its host stars every 137 days. Beyond the planet’s orbit, approximately 900 times the distance between the Sun and the Earth, a second pair of stars orbits the planetary system.

“Anyone viewing the sky from PH1 would have a spectacular view of all four stars,” according to a blog post on the Planet Hunters website. “More importantly, this amazing system will help us understand how and where planets can form – producing a stable planet in a system where four different stars are moving about can’t be easy.”

Planet Hunters’ astronomers sift through data on more than 150,000 stars collected by the NASA Kepler space mission. Specifically, they look for small changes in light emanating from stars when a possible planet crosses the star’s path.

Astronomers Robert Gagliano and Kian Jek poured over the data and noticed anomalies that confirmed the existence of PH1.

On the Planet Hunters website, the group refers to PH1 as its own “Tatooine,” a reference to a planet in the movie Star Wars, which famously depicted two setting suns.

The research paper about PH1’s discovery was submitted to the Astrophysical Journal Monday at the annual meeting of the Division of Planetary Sciences of the American Astronomical Society in Reno, Nevada.

“I celebrate this discovery for the wow-factor of a planet in a four-star system,” said Natalie Batalha, a Kepler scientist at the NASA Ames Research Center at Moffett Field, California in a release. “Most importantly, I celebrate this discovery as the fruit of exemplary human cooperation – cooperation between scientists and citizens who give of themselves for the love of stars, knowledge, and exploration.”

(An artist’s illustration of PH1, a planet discovered by volunteers from the Planet Hunters citizen science project. Beyond the planet’s orbit approximately 900 times the distance between the sun and Earth, a second pair of stars orbits the planetary system. Image Credit: Haven Giguere/Yale)