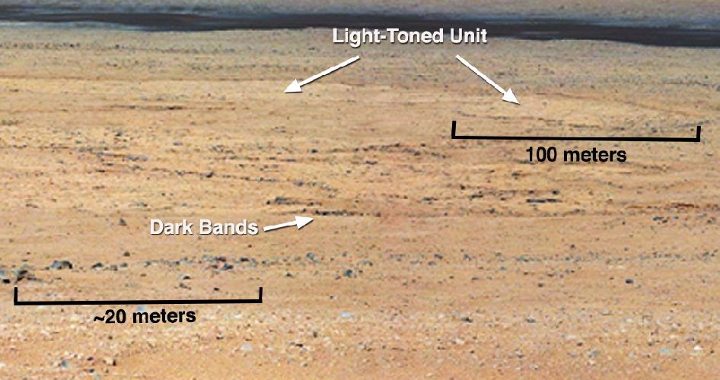 The Mars rover Curiosity is about to undertake its first major scientific experiment on the Red Planet. Before Curiosity heads off to its primary destination, the foothills of Mount Sharp, scientists want to learn more about the terrain surrounding the rover’s landing site.

The Mars mission team members are fascinated with the geology of the area, according to Rob Manning, the Mars Science Laboratory’s (MSL) chief engineer. They’ve noticed the surface is covered with a type of gravelly material, rocks called cobbles and various collections of compressed soil.

“It may very well be that we’re on a place that has been affected by water in the past, and that’s very exciting because that’s what we had hoped for,” Manning said.

Since landing seven weeks ago, Curiosity has traveled about 91 meters, approximately the length of an American football field. The rover is now traveling in a different direction toward a location called Glenelg, which lies about 400 meters east-southeast of Curiosity’s landing site.

One type of terrain scientists want to learn more about is a kind of bedrock which could be suitable for eventual drilling by Curiosity.

The next is an area marked by many small craters and scientists believe it might represent an older or harder Martian surface.

The third terrain is similar to the type where the rover landed. It’s of particular interest to team members because they’d like to determine if it contains rocks with the same kind of texture as those found in an area close to the landing site where blasts from the descent stage rocket engines scoured away some of the surface.

On its way to Glenelg this week, the rover came across an unusual pyramid-shaped rock. The rover team is planning to touch this mystery rock with a spectrometer to determine its basic composition. They’ll also use an arm-mounted camera to take close-up photographs. This encounter will likely be the first time the rover uses its robotic arm to touch a Martian rock.

Curiosity will then continue on its voyage to Glenelg, where the team will choose another rock for the rover’s first analysis of powder drilled from interiors of rocks.

Once the rover’s side trip to Glenelg concludes, Curiosity will head toward its primary destination, Mount Sharp, which may take a year or two to reach.

In fact, the mission is going so well the rover team is amazed everything is working so much better on Mars than it did while undergoing testing here on Earth.

Manning says the rover experienced problem after problem during testing. After seeing the rover perform so well on the Red Planet, the MSL team has concluded Curiosity would rather be on Mars than on its home planet.

And it’s a good thing because Curiosity’s visit there could be extended.

The rover’s older sibling, Opportunity, has continued to roam and examine the planet, long after the planned end of its mission. Manning expects Curiosity will do likewise.

There are several factors which justify that optimism. The rover’s power source, according to Manning, is producing more energy than expected. The team also found the Martian climate is better than was anticipated so the unit doesn’t need as much heating as was first thought. Also, with NASA’s orbiting spacecraft flying overhead, the rover has been able to save a great deal of energy while sending back information, which could allow Curiosity to operate longer.

If Curiosity’s time on Mars is extended, Manning expects the rover to continue its voyage up Mount Sharp, which is made up of various layers of material, with the oldest at the bottom of the mountain and the youngest at its peak.

At each of these layers, Manning says that, there will be an opportunity to look back in time into the Martian geological history. So as long as the rover keeps working and NASA extends its mission, “we will continue going up and explore and explore and there is a chapter, chapter and chapter of books telling us about Mars just ahead of us.”

This weekend on the radio edition of Science World, Rob Manning joins us to provide an update with the latest on Curiosity’s mission.