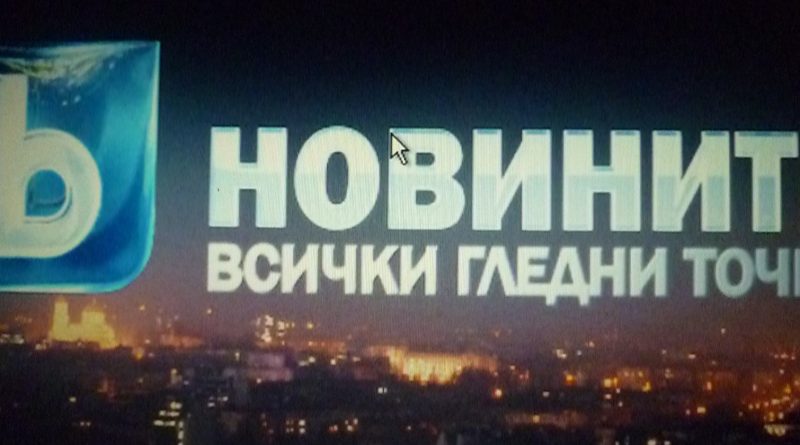 The slogan of bTV, Bulgaria’s most-viewed privately-owned television channel, is “all points of view”. The channel, which ratings claim to have consistently the highest viewership in the country, has for several days found itself in the discomfiting position of being the target of a campaign alleging that it has failed that very mandate.

Unlike the other media war raging in Bulgaria – narrated elsewhere on this website – bTV finds itself not in battle with a rival media group, but instead on the receiving end of barrages of indignant criticism from thousands of its own viewers (or non-viewers, depending on how many heeded to call to boycott bTV).

Rewind tape: Controversy around bTV began because of the station’s coverage of protests against the Forestry Act amendments, which opponents decried as opening the way for exploitation of state forest land by individual resort developers.

Protests organised mainly on social network Facebook brought large numbers of crowds to Eagle’s Bridge in Sofia, in what other media described as demonstrations on a scale not seen in Bulgaria for decades.

Resentment grew against the channel for what its detractors saw as one-sided coverage of the protests. Matters worsened when coverage of a counter-protest by those who favour the amendments (arguing, for the record, that the proposed changes would benefit Bulgaria’s tourism industry and job creation) was illustrated by footage of a substantial crowd – unfortunately, a substantial crowd of those opposed to the amendments.

With emotions running high, an incident happened, the facts of which are disputed. Amid the crowd at Eagle’s Bridge, bTV cameraman Ivan Filchev was assaulted. A man has been arrested after what Filchev says was an unprovoked attack. Other accounts allege that Filchev was an active participant in the scuffle, an allegation he rejects.

Social networks, notably Facebook, already abuzz with ire directed against bTV, jangled noisily when bTV talk show host Diana Naidenova sought, from conservation activist Petko Tsvetkov, an apology on behalf of all the citizen protesters for the assault of Filchev. Naidenova’s interview, derided by critics as hectoring, went viral on the internet. Similarly, another bTV figure, Lora Kroumova, came under fire for her stance in her interview with Andrei Kovachev of the Bulgarian Greens party (Kovachev is not to be confused with the MEP of the same name for ruling party GERB).

With participants in the protest now crying “down with bTV” and holding posters lampooning the television channel, an apology by Naidenova was rejected by internet forum participants as insincere. A statement by bTV, affirming the professional standards of journalism on which it has always prided itself, similarly was given short shrift.

Those angry at bTV had not only the station in general, and Naidenova and Kroumova in particular, as the focus of their ire. On social networks, allegations were made that bTV was acting in the interests of First Investment Bank executive director Tseko Minev, widely perceived by those opposed to the amendments – lately vetoed by President Rossen Plevneliev – as one of the main beneficiaries of the changes to the Forestry Act (as reported further on, this is among allegations that bTV adamantly rejects).

Having received 42 letters of complaint (reportedly an unprecedented number for any single group of complaints against a Bulgarian television station), the Council for Electronic Media – the body established by statute to regulate Bulgaria’s broadcast media – pronounced itself on the issue.

The head of CEM, Georgi Lozanov, said that the council found bTV’s coverage to have been “tendentious” but had not violated the Radio and Television Act and so there was no legal basis to sanction bTV. The council wrote off the showing of the footage of “anti” protesters to accompany a story by the “pros” was likely an inadvertent error.

However, Lozanov said that a penalty could come in the form of public mistrust.

The council handed plaudits to public broadcaster Bulgarian National Radio for meeting all professional standards in its coverage of the protests (ironically, using the phrase that the national radio had given “all points of view” in its reporting) but the council also went off at somewhat of a tangent in criticising the other public broadcaster Bulgarian National Television for the airtime that it was devoting to the Euro 2012 football championship, which BNT has the licence to show. Aside from that, the council said that BNT’s June 14 coverage had highlighted the views of those supporting the amendments while those opposed were presented as “a total mass”.

As a sideshow, there were reports that the Bulgarian branch of hacker group Anonymous had called on bTV Media Group to apologise for what Anonymous termed the “manipulations and insinuations” by the television station, alleging bTV to be guilty of total censorship to serve private, corporate and political interests. Unless such an apology was forthcoming, the video posted on YouTube said, bTV’s shortcomings would be exposed by Anonymous, which also called for a boycott of bTV and the products advertised on the channel.

(Presuming until otherwise proven, of course, that this was a genuine message from Anonymous; for more than one reason, Anonymous would have trouble dealing with identity theft by a copycat.)

On June 27, bTV responded with a lengthy statement, said that in spite of the fact that the mistakes in its coverage had been unintentional, “they understandably caused outrage among some of our viewers and caused a false impression of biased representation of events on bTV”.

“We apologise to viewers who felt misled and harmed,” bTV said. It said that mistakes had been analysed and sanctions imposed, and the station would take all steps necessary to ensure that such mistakes were not repeated.

BTV said that it strongly rejected speculation about deliberate bias, saying that the channel was part of a multinational company “whose core value is viewers’ trust” and whose editorial policy had as its core independence of commercial interests.

As part of an international group, bTV was part of a public company whose shares were traded on the New York Stock Exchange and the entire management team was subject to periodic audits. One aspect was a check whether there had been deviations from the rules on conflict of interest.

Not once in the 12-year history of bTV had such irregularities been found, the station said.

“We recognise the responsibility that we bear to bTV’s millions of viewers,” the station said. “The strongest evidence of the impartiality of bTV is and will continue to be the trust of viewers.”

A day earlier, news website Mediapool had quoted Boryana Dimitrova of the Alpha Research polling agency as saying that there had been a sharp downturn in the proportion of Bulgarians who trusted reports in the mass media.

A notable point of view, indeed.