The press barons of Bulgaria are whacking each other with rolled-up newspapers, figuratively speaking, in a media war with profound commercial and political implications – and one in which platoons of libel lawyers would have ammunition to spare.

It is a war that holds out no prospect for truce and may be running only to one deadline, the fact that Bulgaria is heading for national parliamentary elections in 2013. The battle is for power, influence, reputation and the rules of engagement allow for confrontations that rumble with the thunder of a thousand presses.

In no particular order, on one side is media magnate Irena Krasteva, owner of – among others – Telegraf, Monitor, Politika, Meridian Match and television station TV7; with her is her son Delyan Peevski, a member of Parliament for Ahmed Dogan’s Movement for Rights and Freedoms; and Tsvetan Vassilev, majority owner of Corporate Commercial Bank and chairman of the board of Victoria FATA Insurance.

On the other are Lyubomir Pavlov and Ognyan Donev, since 2010 the owners of mass-circulation dailies 24 Chassa and Trud. Plovdiv-born Pavlov’s background is in centre-right politics and he has headed Municipal Bank; Donev is majority owner of Sopharma, the pharmaceutical and property interests company, and currently heads the Confederation of Employers and Industrialists inBulgaria.

The cast of characters is more complex than this, of course, in a battle of titans that has tended to conjure a tornado that draws others into it. Not least among these are the many readers of the media who see the battle manifested in stories and dramatic events – allegations, prosecutions, threats of court action – with little or nothing to help anyone see clearly amid the murk of cannon smoke.

Pavlov and Donev are presented by their detractors as large-scale money launderers; for good measure, Pavlov is alleged to be a document fraudster too. They deny these allegations, and for the sake of simplicity, as you read on in this narrative, you may safely treat any allegation made about anyone mentioned in it as having been denied.

In April 2011, Pavlov and Donev won control of Bulgarian Media Group in a transaction that their erstwhile fellows in the acquisition of the newspapers from Germany WAZ group, Hristo Grozev, Karl Hapsburg and Daniel Rutz, had disputed.

That drama, however, has paled in the background compared to the current one.

It has involved an alleged transcript of a phone call involving Pavlov in a conversation supposedly indicating that he has undue influence over prominent figures in government and the prosecution (allegations he denies and has suggested that recordings of his phone conversations have been re-edited to suit defamatory ends against him). The alleged conversation was published in Tosho Toshev’s Presa; Toshev, former long-time editor of Trud, was ousted after the Pavlov-Donev takeover. Further, Pavlov has alleged that the transcript was revenge for his involvement in a panel discussion in Brussels that criticised an absence of media freedom in Bulgaria.

On June 25, TV7 weighed in with a lengthy “investigative” report alleging that Pavlov was using properties he reportedly owns on France’sCote d’Azurfor money laundering. The allegation was picked up by Novinar, a daily outside Pavlov-Donev ownership. Pavlov has said that he will be taking TV7 and other publications in the Krasteva-Peevski axis to court for defamation, and again – for the record – vehemently rejects the allegations as baseless and part of the overall smear campaign against him.

Readers of 24 Chassa and Trud, meanwhile, on June 27 were presented with articles detailing Peevski’s alleged “shady deals” which, the newspaper alleged, involved Prime Minister Boiko Borissov’s centre-right government pouring money into Corporate Commercial Bank in return for which, so it was alleged, the newspapers of New Bulgarian Media Group publish hagiographic accounts of Borissov and his administration.

(Theories about what lies behind the dynamics of what is described as a generally cosy relationship between Borissov and the Bulgarian-language media have been aired in-depth in a book by e-vestnik editor-in-chief Ivan Bakalov, entitled In the Shadow of Boyko Borisov, published in English in 2011.)

Corporate Commercial Bank has long been a bone of contention in this battle. Earlier in June, the Union of Publishers in Bulgaria (one of two rival associations of publishers) lodged a complaint with the European Commission, alleging that state support for Corporate Commercial Bank amounted to putting the Krasteva-Peevski media in a privileged position on the Bulgarian media landscape.

Corporate Commercial Bank’s Vassilev got some further attention the same day from 24 Chassa and Trud, with articles, respectively, about how he had “got his hands on” money for heating insulation provided by the European Union; and another detailing the controversy about Archons in the Bulgarian Orthodox Church. After suggesting that most of those who had been named Archons were unworthy of the honour, the article asked whether it was not time for Vassilev to have the title conferred on him. Also on June 27, an article on the 24 Chassa website about Peevski opened by describing him as “the face of an evil scheme in which government, media, politics and economics are blended in a way impossible for Europe” and after that grew more insulting.

Into the fray, on June 15, came weekly Bulgarian-language Capital (owned not by Pavlov and Donev but by the Economedia company, the property of Ivo Prokopiev and Teodor Zahov) with a lengthy article that, in effect, called into question the credibility of Pavlov’s accusers. Two days after its appearance, the Capital article was republished in full on the websites of 24 Chassa and Trud.

As an aside, Economedia’s publications have their own history with Krasteva and Peevski’s New Bulgarian Media Group. Stories by Capital in the first half of 2010 about the media owners and Corporate Commercial Bank led to, among other things, retaliation in the form of a story in Monitor about Prokopiev and his Kaolin business, as well as talk of court actions. The Competition Protection Commission, in early 2011, fined Economedia for what the commission said was damage to New Bulgarian Media Group’s commercial position; and the latter’s publications’ coverage of Prokopiev and his business dealings tends to run towards the severely unflattering. In a strongly-worded entry on his personal blog, re-posted by Capital and  its stablemate Dnevnik on June 28, Prokopiev derided a concerted campaign to sabotage his business interests and expressed regret about declining standards of journalism in Bulgaria.

More recently, this past weekend, more drama erupted over the issue of distribution of newspapers, expanding the Pavlov/Donev and Krasteva/Peevski tussle into new terrain.

Overall, this is all part of a running battle involving people already of considerable influence; Corporate Commercial Bank’s Vassilev and Sopharma’s Donev both were ranked, in the recent rating by Forbes, among the top 10 most influential people in Bulgaria. In turn, in terms of media influence, on any given day the average Bulgarian buying a newspaper or reading a media website is likely to be looking at a product of one or both of the warring groups.

Wars, generally, are fought for territory; this is one in which the artillery exchanges come in the form of allegations and denials. As this war endures into the summer of 2012 with no prospect of resolution, one must sympathise with any Bulgarian newspaper reader confronted with these allegations and denials, left to make up their own minds about who – if anyone – they believe, and what in fact the battle really is about.

Because, though it was more succinctly paraphrased around the time of World War 1, one must go back to Samuel Johnson’s original thought in The Idler, in 1758: “Among the calamities of war may be jointly numbered the diminution of the love of truth, by the falsehoods which interest dictates and credulity encourages”. 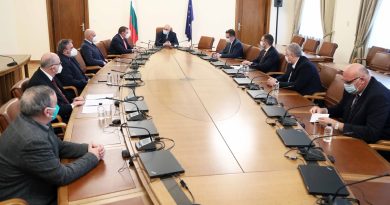 Covid-19: Number of patients in hospital in Bulgaria up 10% in past week