A poll by the Market Links agency, the results of which were released on September 7, showed that were parliamentary elections held now in Bulgaria, seven groups would win seats in Bulgaria’s 48th National Assembly.

The results of the poll come less than a month before Bulgaria’s October 2 2022 early parliamentary elections, the fourth time in two years that the country elects a legislature.

According to the Market Links poll, Boiko Borissov’s GERB-UDF coalition has the largest share of support, at 22.9 per cent, with the Kiril Petkov-Assen Vassilev We Continue the Change (WCC) party – which won the largest share of seats in Parliament in the third elections in 2021 – now in second place, at 17.8 per cent.

This gap between GERB and WCC is similar to that shown in a poll, the results of which were released soon after the start of official campaigning, by the Alpha Research agency, as The Sofia Globe reported earlier.

According to the results of the poll, the Bulgarian Socialist Party and the Movement for Rights and Freedoms are tied at 10.9 per cent support each among those who intend to vote on October 2.

The reformist Democratic Bulgaria coalition has 8.1 per cent support, followed by pro-Russian party Vuzrazhdane at 7.6 per cent.

Bulgaria Ascending, the party formed around former caretaker prime minister Stefan Yanev, who was axed from the December 2021 government for, as defence minister, using the Kremlin’s “special military operation” euphemism for Russia’s war on Ukraine, has 4.7 per cent, just above the four per cent share of seats threshold to win seats in the next National Assembly.

Market Links said that its poll showed that cable television presenter Slavi Trifonov’s ITN party had 3.8 per cent support, below the threshold to win any seats.

The survey was financed and carried out jointly by bTV and Market Links, among 1067 people over the age of 18 between August 27 and September 3, using direct personal interviews and online surveys. 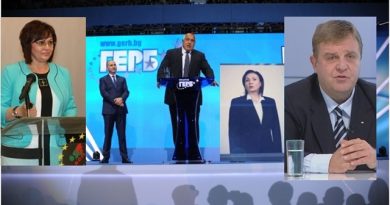 With months to go to elections, Bulgarian politicians indulge in chatter on coalitions