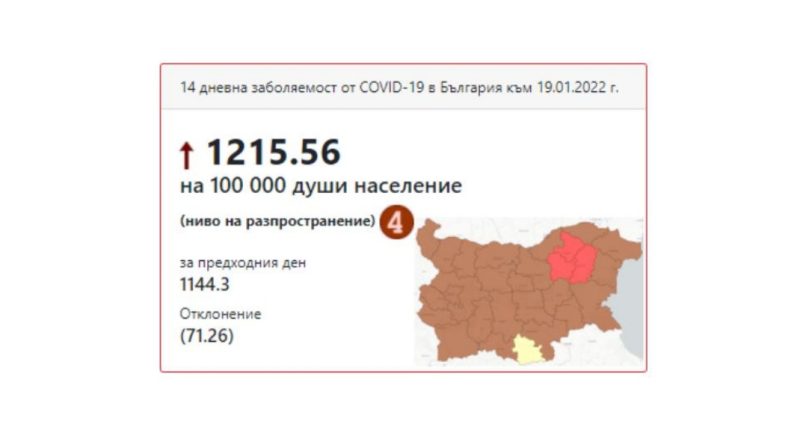 A total of 11 181 new cases of Covid-19 were confirmed in Bulgaria in the past day, setting a new record for a single day since the pandemic began in the country, according to the January 19 report by the unified information portal.

The number of confirmed cases represented 24.32 per cent of tests done in the past day.

The previous record since the pandemic began in Bulgaria was 9996 new cases reported on January 18.

The January 19 report said that 91 people in Bulgaria who had tested positive for Covid-19 died in the past day, bringing the country’s death toll linked to the disease to 32 338.

Of those whose deaths were registered in the past day, 92.31 per cent had not been vaccinated against Covid-19.

The number of active cases increased by 18 618 in the past day.

The report said that in the past day, 1756 people had been registered as having recovered from the virus, bringing the total to 639 352.

There are 5259 patients with Covid-19 in hospital in Bulgaria, including 660 newly admitted. There are 554 in intensive care, an increase of 13 compared with the figure in the January 18 report.

A total of 128 medical personnel tested positive in the past day, bringing the total to date to 19 085.

The European Centre for Disease Prevention and Control’s (ECDC) online vaccine tracker said that as January 18, the uptake among the total population of Bulgaria of at least one vaccine dose was 29.2 per cent, of full vaccination 28.4 per cent and of a booster dose, 7.2 per cent.

These are the lowest vaccination percentages of a country in the EU-EEA area.

In the EU-EEA area, the uptake among the total population of at least one dose is 73.3 per cent, of full vaccination 69.1 per cent and of a booster dose, 33.2 per cent, the ECDC said.