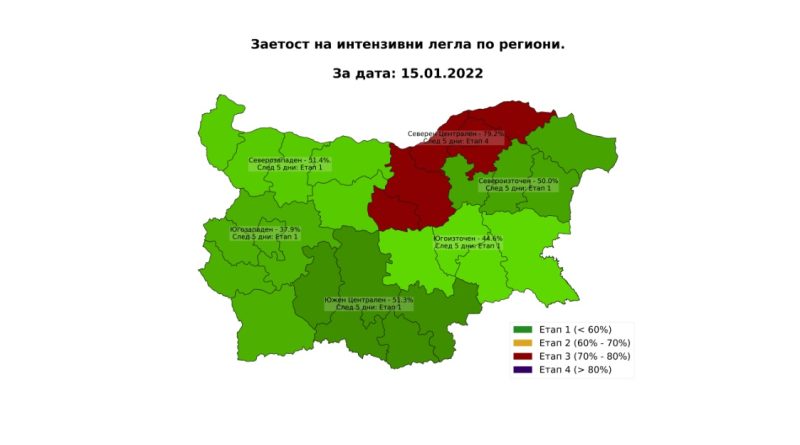 A map published by Bulgaria’s government on January 15 shows that intensive care beds in the country’s north-central region are 79.2 per cent full, on the verge of triggering the strictest level of restrictive measures envisaged in the government’s new plan for responding to the Covid-19 pandemic.

The plan, announced this week, divides Bulgaria’s 28 districts into six clusters, and categorises the situation into four stages according to the percentage of ICU beds filled.

Stage four begins when 80 per cent of ICU beds in a cluster are filled.

Stage four also triggers a new form of business support introduced by the government in the plan.

Eligible for the aid will be micro, small and medium enterprises in all sectors of the economy.

The aid is 20 per cent of the average net revenue of the enterprise for 2021, up to a ceiling of 100 000 leva. It is payable for each day the enterprise is shut down because the region has reached stage four.

The new system also provides for the map to show a five-day projection.

According to the map posted on January 15, in five days’ time the other five regions will remain at stage one.