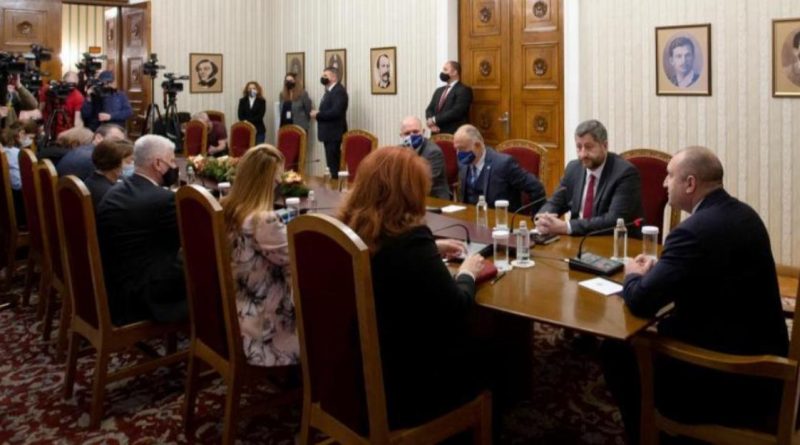 Bulgarian President Roumen Radev said on December 7 that he hoped that within a few days he would be able to hand the We Continue the Change (WCC) party a mandate to form a government to be proposed to Parliament.

WCC won the largest share of seats in the 47th National Assembly elections on November 14. Bulgaria’s constitution entitles the largest parliamentary group to be first to receive a mandate to form a government.

Radev indicated he would await a coalition government agreement before handing over the first mandate.

WCC is in talks with three other parliamentary groups – the Bulgarian Socialist Party (BSP), Slavi Trifonov’s ITN party and the Democratic Bulgaria coalition. Together, the “WCC+3” have 134 out of the 240 seats in Bulgaria’s National Assembly, enough to vote a government into office if they agree on a deal.

Radev held consultations with representatives of the seven parliamentary groups on December 6 and 7.

He met WCC, the GERB-UDF coalition, the Movement for Rights and Freedoms and the BSP on Monday, and on Tuesday received representatives of ITN, Democratic Bulgaria and Vuzrazhdane.

ITN parliamentary group leader Toshko Yordanov said that the party would do “everything in our power to have a normal government in the country”.

“We will be predictable and loyal partners,” Yordanov said.

Speaking after the meeting with Radev, ITN’s Lyubomir Karimanski said on December 7, the parliamentary group and the party’s experts were discussing the proposed government programme.

Karimanski said that so far, ITN did not know how many ministries it would have.

Democratic Bulgaria co-leader Hristo Ivanov expressed hope that this time a government would be formed, adding: “The question is how to make it work afterwards”.

Responding to Radev’s praise for the two caretaker governments he appointed this year, Democratic Bulgaria co-leader Atanas Atanassov said that some of the appointments they had made had not been appropriate, such as the Interior Ministry chief secretary, who had not proven capable of holding such a senior position.

Democratic Bulgaria deputy parliamentary leader Vladislav Panev said that he expected that the reforms that would be carried out by the proposed government would not be very radical because of the differences among the four groups involved.

After the meeting, Atanassov said that Democratic Bulgaria had warned WCC that the approach that party was taking – of handing full control of each ministry to a participating party – would result in “feudalisation” of individual ministries.

Kostadin Kostadinov, leader of the anti-vaxxer, pro-Russian Vuzhrazhdane party – the smallest group in Parliament – told Radev that the most important thing was to scrap all anti-epidemic restrictions.

Speaking to reporters on December 7, BSP leader Kornelia Ninova said that she expected the final version of the coalition agreement by the end of the day.

Ninova said that there were no disagreements between the BSP and WCC, following talks held on Monday to clear up some issues.

She said that she would schedule a meeting of the BSP national council only after receiving a coalition agreement with written policies and the distribution of cabinet posts.

A meeting of the national council had been scheduled for December 7, but was postponed, with the ongoing negotiations being cited as the reason.

“We are waiting for the approval of the others so that we can appear before the (BSP) national council with a serious proposal,” she said.

WCC parliamentary leader Andrei Gyurov repeated that the differences among the negotiating parties were not large.

“As we have said many times, we have very good agreement on more than 90 per cent of the points. There are still some things that need to be clarified. We are currently in a period of negotiations and clarification,” he said.

Gyurov said that WCC expected that there would be a final agreement soon.

Two Bulgarian MPs face prosecution, one for vote-buying, the other for killing a pedestrian