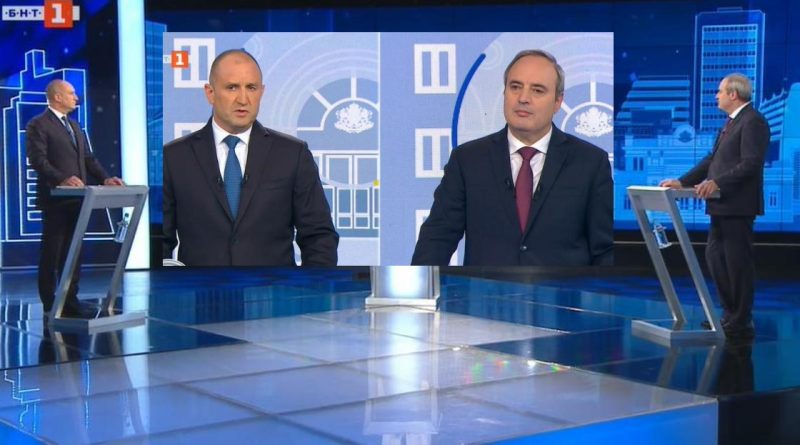 On the balance of the political forces that will support him in the second round of Bulgaria’s presidential elections on November 21, Roumen Radev will win a second term as the country’s President.

But in the one and only television debate ahead of that second round, Radev – the incumbent head of state, the former Air Force commander and pilot of ageing Soviet fighter jets, with a chestful of medals, none won in actual combat – had his arse thoroughly kicked by his stoop-shouldered rival, Sofia University rector Professor Anastas Gerdzhikov.

By the end of the 90-minute television event, ably moderated by public broadcaster Bulgarian National Television’s Adelina Radeva, Radev had the facial expression of one on the defensive. Not the face of a military victor. But then, again, he has only been shown to be good at flying old aircraft. Just never in actual combat.

Gerdzhikov, whose campaign until now has been limited to being “Mr Nice Guy” swooped on Radev on the record of the caretaker government that the incumbent president appointed and its abysmal, fatal, record on Covid-19 deaths in Bulgaria, the EU country with the highest Covid-19 death rate and its lowest percentage of vaccines against the disease.

As Radev sought to defend that record, Gerdzhikov said, tellingly, “I don’t agree with your rosy picture”.

It was enough to look at Bulgaria’s record of Covid-19 deaths, the numbers of those in hospital, to see that the country was not out of the crisis, Gerdzhikov said, adding his indictment of the inept way in which the “green certificate” had been introduced.

The “green certificate” was not pleasant, said Radev, adding that the alternative was a full lockdown.

Adding to his indictments of the caretaker administration appointed by Radev, Gerdzhikov said that Bulgaria’s private sector was on the verge of collapse, pointing to soaring energy and gas prices, and adding that the caretaker administration had taken a long time to present to the EU its Recovery and Stability Plan proposal. Had that not been delayed, the country would have had the money it needed, he said (omitting, of course, that Boiko Borissov’s GERB, which backs Gerdzhikov, had not achieved anything in this respect, either; but politics is about perceptions).

Gerdzhikov pressed on with his indictments, on the impact of soaring electricity prices on business, and by extension, household consumers.

At one point, Radev sought to hit back, on the topic of the photographs of Borissov’s bedroom, with the gold ingots, the vast sums of euro in cash, the alleged undeclared property in Barcelona, every symbol that has been seized on the symbols of the former prime minister’s vast corruption: “The bedside drawers are not mine,” said Gerdzhikov. “But the division in society and your failures are yours, personally”

“You are trying to tie me to other people, a good president should not only think of Boiko Borissov,” Gerdzhikov said.

At the end, BNT’s Radeva (presumably, no relation) asked the two candidates to cite their favourite poet. To the obvious delight of Professor Gerdzhikov, a philologist, Radev – still irritated – fudged the question.

But then, it was – surprisingly – entertaining television. Certain of himself, prepared, assertive, Gerdzikov did well. Perhaps complacent beforehand, perhaps complacent that victory would come easily, Radev did not. Barring one telling point, that Gerdzhikov had the backing of an effective political establishment, massively corrupt, targeted under the US’s Magnitsky Act.

But then, this was not an Eisteddfod. Nor an election either, just a television event, but not a game show, nor a song contest. On Sunday, it is Bulgaria’s electorate that will decide who wins.