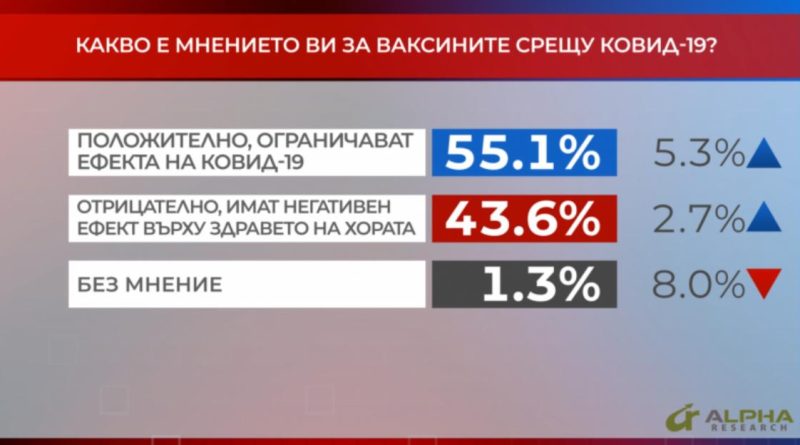 About 55.1 per cent of Bulgarians have a positive view of vaccines against Covid-19 and see them as limiting the effects of the disease, while 43.6 per cent are against, saying that they have a negative effect on people’s health, according to a poll by the Alpha Research agency done for Bulgarian National Television’s weekly Referendum programme.

Of those polled, 1.3 per cent said that they did not have an opinion.

The figure for those in favour, however, exceeds actual Covid-19 vaccine uptake in Bulgaria, which began its vaccination campaign in late December 2020.

According to figures posted by the European Centre for Disease Prevention and Control (ECDC) on October 20, the cumulative uptake of at least one dose of vaccine in Bulgaria is 25 per cent, while the figure for those who have completed the vaccination cycle is 23.9 per cent – with both figures vastly below those for the EU-EEA as a whole.

The Alpha Research poll found that 67.1 per cent of Bulgarians saw Covid-19 as a serious illness that should be approached responsibly, while 32.1 per cent said that it was “not so serious” and that its significance was exaggerated. The remaining 0.8 per cent responded “don’t know”.

The BNT weekly programme was broadcast a few hours after caretaker Health Minister Stoicho Katsarov announced that as of October 21, admission to indoor public places would require a “green certificate” that a person had been vaccinated, undergone Covid-19 or had a negative result of a PCR test no older than 72 hours or an antigen test no older than 48 hours.

On the question of measures, the poll found that only 7.4 per cent of Bulgarians favoured a “full lockdown”.

The largest share, 64.1 per cent, said that the measures should be the wearing of masks, physical distancing, strict control of implementation of measures, without shutting businesses and institutions.

About 7.5 per cent favoured closing part of businesses and institutions.

The poll found that 14.7 per cent of Bulgarians said that there should be no anti-epidemic measures at all.

All of 6.3 per cent of those polled said that they did not have an opinion on measures.

Asked who they would trust the most to get additional information about vaccines, 43.2 per cent said their personal doctor, while 35 per cent said experts, immunologists and virologists.

“The battle was for those 40 per cent,” Vulchev said. “If they had all been vaccinated, the situation in the country would have been radically different. In this time, only a third of them have received the vaccine”.