A poll by Alpha Research, the results of which were released three days before the start of the official campaign period for Bulgaria’s November 2021 early parliamentary elections, points to a six-group Parliament in which a majority will not be achieved without the votes of three or four groups.

Bulgarians are heading to the polls on November 14 for the third time in 2021, after the parliaments elected in April and July failed to produce an elected government. The early parliamentary elections are being held on the same day as the regular presidential elections.

According to the poll, Boiko Borissov’s GERB-UDF coalition has 23.1 per cent support among those who firmly intend to vote in the early parliamentary election.

There is a battle for second place between Kornelia Ninova’s Bulgarian Socialist Party (BSP) and the We Continue the Change (WCC) party founded by Kiril Petkov and Assen Vassilev, who held portfolios in the first of this year’s two caretaker governments.

WCC had begun with a flying start, but at the moment showed a “high plateau” rather than exponential growth, Alpha Research said.

The BSP had in its favour the high level of motivation of its voters, but the Covid-19 crisis and machine voting could reduce this result, the agency said.

This was a reference to BSP voters being discouraged to vote in April because of the Covid-19 crisis, while numerous supporters of the party were reluctant to vote in July after electoral law was changed so that voting was done only using a machine.

An expected decision by the Constitutional Court on the dual citizenship of Petkov could also affect the motivation of voters, the agency said.

Alpha Research said that the “serious and continuing” erosion of Slavi Trifonov’s ITN party had reduced it from the first to the fourth or fifth political force. In July, ITN won the largest share of seats in the National Assembly.

At the start of the campaign, Democratic Bulgaria has 10.9 per cent support, a “symbolic lead” over Trifonov’s party, which had 10.4 per cent, Alpha Research said.

Both ITN and Democratic Bulgaria are suffering severely from an outflow of voters to WCC.

The collapse of ITN is particularly strong, falling by a further five percentage points in just one month, with support for the party halving since the July elections.

Democratic Bulgaria is also losing between one-sixth and one-fifth of its voters, attracted by WCC.

With 9.3 per cent support among those intending to vote on November 14, the Movement for Rights and Freedoms is set to be sixth among the groups that will enter the 47th National Assembly.

Given the late nomination of its leader, Mustafa Karadayi, as its presidential candidate, the current poll does not take into account the mobilising effect of this move on the parliamentary vote, Alpha Research said.

There is no serious statistical probability that any other party will overcome the four per cent threshold to win seats in the next National Assembly, the agency said.

About 10.6 per cent of those intending to vote had not yet decided who to vote for, the poll found.

Alpha Research’s poll found that 47.6 per cent of adult Bulgarian citizens intended to vote in the parliamentary election, and 52.7 per cent in the presidential elections.

“Expectations that a two-in-one election will increase voter turnout are justified, and the presidential vote has traditionally aroused more interest.”

The factors that could reverse this trend are the development of a worsening Covid-19 situation, the effects of the machine vote on the conditions of the two elections, and a possible sharp deterioration of the economic situation in the country, the agency said.

The poll was done from October 4 to 10, using Alpha Research’s own funds and has been published on the agency’s website. It was done among 1123 adult citizens from all over Bulgaria. A stratified two-stage sample with a quotas from the main socio-demographic characteristics was used. The information was gathered through a direct standardized interview with tablets in the homes of the respondents. Alpha Research is responsible for the data and interpretation published on its website, but not for the selective or manipulative use of such data, the agency said. 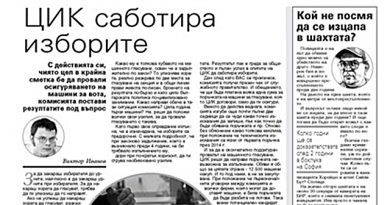