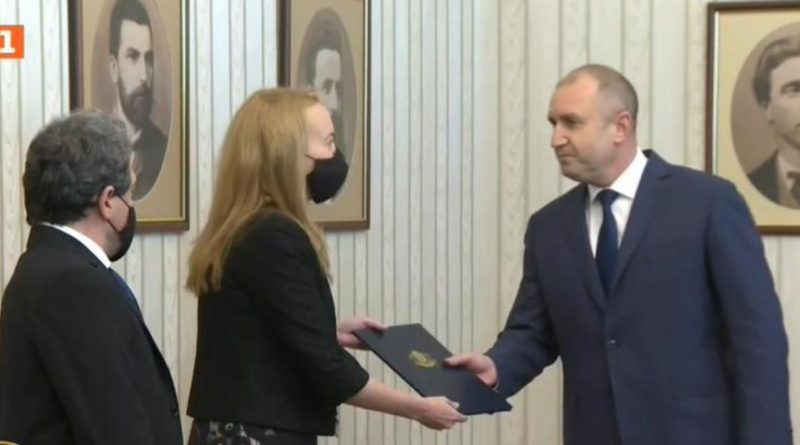 At a brief ceremony on the morning of April 28, cable television presenter Slavi Trifonov’s political party formally refused a mandate offered by Bulgarian head of state President Roumen Radev to seek to get a government approved by Parliament.

Earlier, Boiko Borissov’s GERB party, which won the most votes in the April 4 parliamentary elections, returned the first mandate to which it was entitled in terms of constitutional rules.

GERB did so against a background of all the other parliamentary groups refusing to vote for a government nominated by Borissov’s party.

As the winner of the second-largest share of votes, Trifonov’s party was entitled to the second mandate. Trifonov announced on Facebook on April 26 that his party would refuse it.

The ceremony in Radev’s office was attended by chess champion Antoaneta Stefanova, the MP nominated by Trifonov as prime minister, and Toshko Yordanov, leader of the parliamentary group of Trifonov’s ITN party.

Stefanova told Radev that it was “not normal for us to form an unprincipled government”.

“Bulgaria needs a regular and effective government, I understand your motives,” Radev said.

With regard to offering a third mandate, the constitution gives the head of state a free hand to choose any parliamentary group.

Earlier, reacting to Trifonov’s announcement that his party would return the mandate, GERB leader and outgoing Prime Minister Boiko Borissov dismissed him as a “political coward”.

Kornelia Ninova’s Bulgarian Socialist Party, which ran third on April 4, said that by returning the mandate, Trifonov had brought down the opportunity to dismantle the “Borissov model”.

Trifonov’s party was throwing the country into chaos and ensuring the return of GERB, the BSP said.

Returning the mandate would block revising the Budget to provide funds for health, economic and social measures, and block the adoption of the Recovery and Sustainability Plan, Ninova’s party said.

All that would happen would be the adoption of amendments to the Electoral Code regarding the Central Election Commission and increasing the number of polling stations abroad, which would help the Movement for Rights and Freedoms (MRF), the BSP said.

Electoral Code amendments to be debated by the National Assembly at second reading remove the limit of no more than 35 polling stations in a non-EU country in Bulgarian elections. Critics of the proposed amendment say that this would boost the number of votes the MRF would get in Turkey, an electoral stronghold for that party.

On April 27, the MRF said that if Radev offered the third mandate to Ninova’s party, the MRF would not vote in favour of a government nominated by the socialists.

As of the morning of April 28, the Democratic Bulgaria coalition has not announced a formal position on the decision by Trifonov to refuse the mandate.

Maya Manolova, parliamentary leader of the “Rise Up! Mobsters Out!” group, said that the vote on April 4 had shown that the Bulgarian people did not want a government of the parties of the “status quo” but wanted “a cabinet of change”.

“Would we accept a third mandate? The President must first decide to whom to hand it. It is not logical to give it to the smallest parliamentary group,” Manolova said.

Maria Cappone, also of the “Rise Up! Mobsters Out!” group, described Trifonov’s decision as “strange”.

Alluding to chess, Cappone said: “When the king is in the corner and the pawn has a chance to advance and become queen, it’s weird to overturn the board and knock down all the pieces. But chess is an individual game, politics itself is a collective effort and there is a great risk of sacrifice.

“The decision is Mr Trifonov’s and we cannot interfere in it. However, my idea of politics is first and foremost about the needs of the people and the state”.

Should the offer of a third mandate to seek to form a government come to nothing, Radev would be obliged to dissolve Parliament, appoint a caretaker government and decree a date for new parliamentary elections.